A tale of two night witches and one war 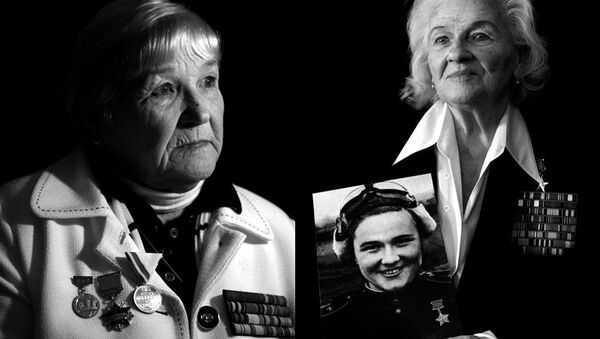 The Soviet Union’s all-female air regiments flew more than 30,000 missions and dropped 3,000 tons of bombs along the Eastern Front in World War II. At home they were known as Stalin’s Falcons, but terrified German troops called them the Night Witches.

“We had a huge task before us,” recalls Lt. Galina Brok-Beltsova, 85, bristling with medals and fierce pride. “There was no looking back or questioning our purpose. Our country decided it for us.”

Brok-Beltsova, along with a handful of other bright-eyed, patriotic romantics, volunteered for combat service, trading their youth for war.

“Something inside of them yearned to explore and to be free,” wrote author and historian Amy Goopaster Strebe in her book Flying for Her Country. “This sensation led them to aviation.”

“I remember when the war started. It all felt so real,” says Nadezhda Popova, now a great-grandmother, who was a pilot in the 46th Guards Night Bomber Regiment. “I wanted to be a part of the battle.”

The daredevil female Soviet pilots flew flimsy wood-and-canvas Polikarpov PO-2 planes against the better-armed, better-equipped enemy during one of the longest and most brutal campaigns of the Second World War. Their German enemies dubbed them the Nachthexen, or the Night Witches.

“We slept in anything we could find - holes in the ground, tents and caves,” recalls Brok-Beltsova. “We would come at night, after the Germans were asleep, and bomb them. They would have to run out into the night in their underwear, and they were probably saying, - ‘Oh, those night witches!’”

Popova, whose hair is white and her manners sedate, still displays her steel as she describes the feeling of being suspended in a fragile airborne cage amid a storm of gunfire.

“It was a dangerous fight, we didn’t have time to be scared,” recalls Popova as she turns the pages of an album in which she has marked the photographs of her comrades.

“We bombed, we killed; it was all a part of war. We had an enemy in front of us, and we had to prove that we were stronger and more prepared,” she says.

The 46th Regiment was the only one of the three original regiments that remained an all-female force. The women often flew 10 to 12 missions a night in slow and obsolete biplanes with primitive navigational instruments. A wire cable jury-rigged to the wings was used to release their bombs.

Men eventually joined the ranks of the other two regiments, which flew heavier fighters and bombers. Despite the Soviet Union being the first nation to allow women to fly combat missions, the regiment’s members were at first ridiculed by their male counterparts.

One Air Force regiment commander, Maj. I. Kleshchov, declared shame on Soviet manhood to see women engaged in the unwomanly business of war:
“They thought we were young, naïve and incapable,” recalled Brok-Beltsova. “But when we were on the frontlines with them, fighting beside one another with the same goal, it was no longer a question of gender.”

Overcoming traditional gender roles, Soviet women demonstrated extraordinary heroism in defense of their motherland. They paved the road for the future of Soviet women in aviation, proving that they too can be equals to men.

“I was a little girl when the war started,” says former pilot Ida Potrokova, 75. “But I’ll never forget the Night Witches. We all respected and admired them. They did a man’s job in the time of war. It was heroic.”

After the war, a number of them continued to fly, some as test pilots. Others retired to a quiet life or returned to work, either in factories or on farms. In spite of the danger and their heavy losses, many of the women described their combat experience as the most exciting time of their lives.

“I sometimes stare into the blackness and I close my eyes,” says Popova. “I can still imagine myself as a young girl, up there in my little bomber. And I ask myself, Nadia – how did you do it?”