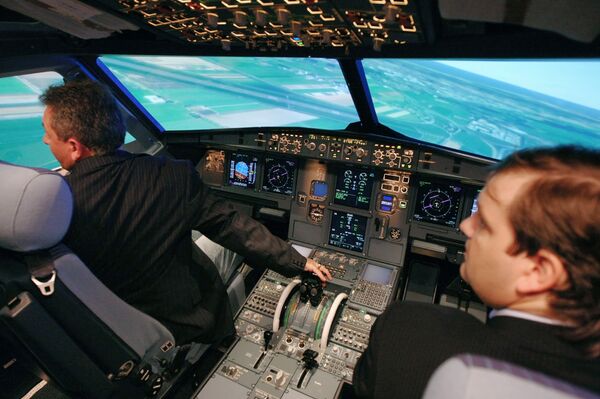 © RIA Novosti . Ruslan Krivobok
/
Go to the photo bank
Subscribe
Russia’s checkered flight safety record was called into question this week after the crash of a Tu-154 airliner near Moscow after take-off. The cause is not yet known.

Russia’s checkered flight safety record was called into question this week after the crash of a Tu-154 airliner near Moscow after take-off. The cause is not yet known.

In March this year, aircrew error was blamed for the crash of an Aviastar airline Tu-204 on approach to Moscow’s Domodedovo airport. The Interstate Aviation Committee, a CIS flight safety authority, blamed the airline for failing to train the crew sufficiently, and the crew themselves for failure to fly the approach properly.

A series of other accidents involving Russian airlines in recent years have also been attributed to aircrew error, which may be related to a nationwide shortage of pilots.

“There is a serious shortage of pilots in this country,” says Alexander Velovich, a Russian aviation journalist and former aircraft engineer. “This is having a serious impact on flight safety. It is not just in Russia, it is a worldwide problem.”

Russia and the other former Soviet republics combined had the world’s worst air traffic safety record in 2009, with an accident rate 13 times higher than the world average, according to the International Air Transport Association.

There are currently 10,000 commercial pilots in Russia, but an estimated 1,000 retire every year, or go overseas to work.

The country needs at least 700-800 pilots a year, according to Yevgeny Bachurin, the former head of Russian air transport agency Rosaviatsiya.

Lured by modern airliners and fat salaries, experienced Russian pilots began flocking abroad after the fall of the Soviet Union. At the end of each academic year, Russian airlines are now scrambling to hire pilots fresh out of flight school.

On average, Russia’s state-run training system produces 650 pilots over a course of three to five years, not enough to satisfy demand.

“The pilot deficit was a consequence of the economic crisis in the 1990s,” says Anastasia Miroshnichenko, general director of the Aviapersonal consulting company.  “Just this year, Aeroflot had to take 10 aircraft out of operation because all their pilots had already flown their maximum annual flight time hours. The deficit is becoming a serious problem.”

In an attempt to find a solution to the problem, the Russian Transport Ministry increased the maximum annual flight time from 800 to 900 hours a year. Aviation analysts say the measure seriously jeopardizes flight safety.

This year, Aeroflot employees wrote to the company’s general director, complaining that the company was not complying with flight regulations for civil aviation pilots.

One solution to the shortage of pilots would be to allow foreign pilots to operate planes in Russia. Currently, all pilots must have Russian citizenship before they can fly in the country. But Miroshnichenko says that some airlines have been making exceptions because the situation is getting so critical.

The shortage of pilots is also a problem abroad.

Belgium’s largest carrier, Brussels Airlines, recently complained of losing 10 captains a month to pilot-hungry airlines in the Gulf, and has requested government intervention.

In the United States, regional carriers have been giving jobs to poorly-paid first officers with considerably less experience than would have been required 15 years ago.

Some carriers are being forced to cancel flights. Northwest Airlines cancelled around 12 percent of its flights in the last full week of June as a result of the pilot drain.

Experts say standards at Russia’s state-run flight schools have significantly declined since the Soviet era. Rookie pilots log less than half of the minimum 150 hours of flight time in modern planes required by Western flight schools.

Aeroflot last month approved to open Russia’s first modern commercial pilot training school, in response to an aircrew shortage crisis that could limit growth in the industry. The state-run airline alone has around 900 pilots, and forecasts a requirement of an additional 250 pilots next year.

“In modern-day Russia the aviation education market is non-existent,” says Miroshnichenko of Aviapersonal. “In the United States, for instance, there are more than 600 accredited FAA training centers. In Russia, there are only six.  If there is no market, there is no future for our pilots”.