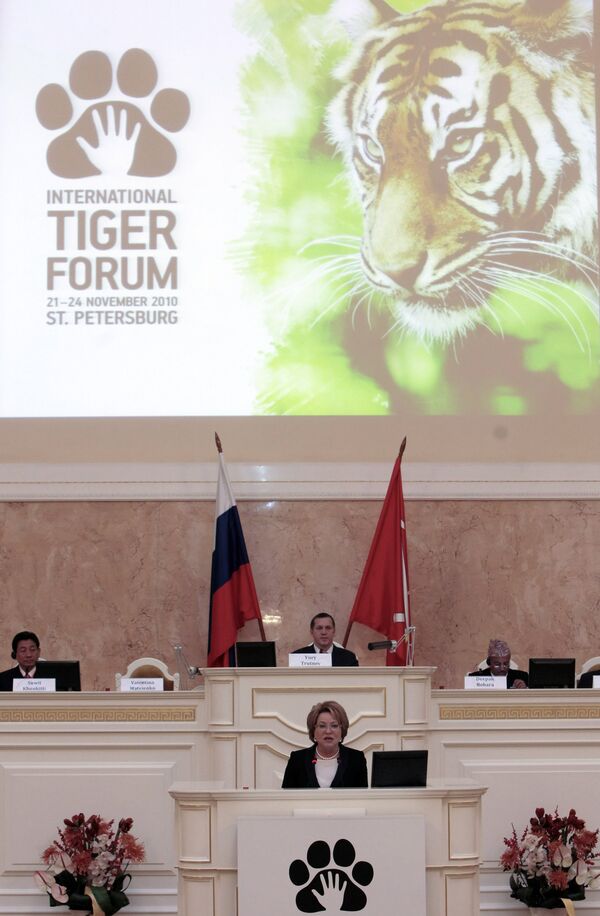 © RIA Novosti . Alexey Danichev
/
Go to the photo bank
Subscribe
The heads of governments of the 13 Tiger Range Countries (TRC) on Tuesday adopted a declaration to save the wild cats from extinction.

The heads of governments of the 13 Tiger Range Countries (TRC) on Tuesday adopted a declaration to save the wild cats from extinction.

Realizing their responsibility before future generations and the necessity to act immediately, the prime ministers declared that they will "strive to double the number of wild tigers by 2022."

The worldwide tiger population has declined from 100,000 to just over 3,000 over the past century.

The premiers also agreed to set up a trust fund to collect money from various donors, as well as to work out other flexible mechanisms to sponsor efforts to save the tiger. They also agreed to continue regular top level meetings.

"It is hard to solve the issues of preserving wildlife in these countries," Putin said. "We should support their governments in order to effectively solve environmental protection issues."

Putin did not identify which countries he was referring to.

"Displaying care about wildlife, we eventually show care about man," he added.

Earlier on Tuesday, Putin said Russia will toughen its laws against hunting tigers.

The Global Environment Facility (GEF) may allocate $12 million to a tiger conservation program, its CEO Monique Barbut told the "tiger forum" on Tuesday.