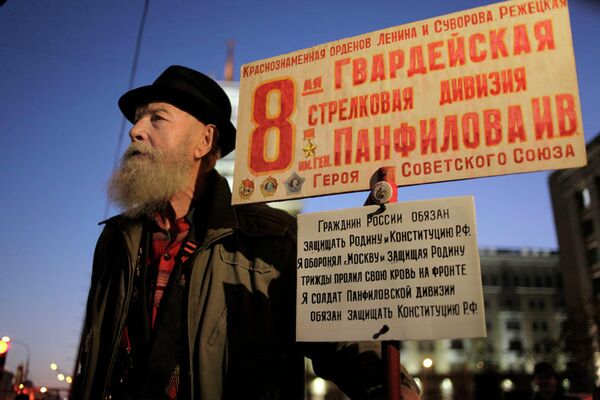 The Russian opposition scored a rare victory on Sunday by gathering well over 1,000 people for an official rally on Moscow's Triumfalnaya Square.

The Russian opposition scored a rare victory on Sunday by gathering well over 1,000 people for an official rally on Moscow's Triumfalnaya Square.

Opposition movements meet on the last day of every month with 31 days to defend Article 31 of Russia's Constitution, which guarantees freedom of assembly.

The event was marred by an inner dispute between the protest's kingpins over the number of participants. Human rights advocate Lyudmila Alexeyeva negotiated a cap of 800 protesters, but opposition leader Eduard Limonov, who demanded 1,500, refused to take part in the sanctioned rally, and held his own unsanctioned demo outside the square.

"Let Lyudmila Mikhailovna [Alexeyeva] watch from her sanctioned spot how we are being dragged into police buses," the opposition portal Grani.ru quoted Limonov as saying before the event.

I for one never miss a chance to defend my rights (and to shout slogans against you-know-who), and this time around, I knew it was going to be something special.

From the thick of the crowd

Alexeyeva, 83, was an eerie sight when she stepped onto a tiny platform tucked away in the corner of the square, her elated voice blaring out of the loudspeakers. A chill licked down my spine as I stood listening and just for a second I could understand how people can be moved to implement change. Or to chuck big lardy things through shop windows.

The speeches after Alexeyeva's are somewhat predictable and the crowd's attention slowly migrates to the other side of the police cordons.

18:27: Limonov's supporters try to cut down part of the fence surrounding the square and light flares but are soon subdued by police. Limonov himself is detained, but quickly released. The live barrier of riot police between the sanctioned and unsanctioned rallies is broken down. There are calls to lay siege to the Kremlin.

Now, noise may not be the best solution to everything but last night it surely was. Besides, what are you supposed to do at a rally? Stand and stare or twist and shout? I went for the latter, as did many others.

I hollered for all I was worth and was joined by none other than an odd-looking Prime Minister Vladimir Putin, the hate figure among the 31-ers, as they are known. Just as I was starting to wonder what on earth he was doing there, I noticed five or six more "Putins" behind him shouting "Down with me!" It was Halloween after all.

19:03: Things are beginning to get out of hand. Around 40 protesters are detained. Another 100 people break off from the rally and march down the Garden Ring, one of Moscow's busiest thoroughfares, toward Russia's parliament, famously hit by tank fire in October 1993. They are stopped by police a few hundred meters away from the building.

20:14: Heading for a McDonald's on nearby Tverskaya Street, I am stopped by an agitated police officer who tells me to take an opposition badge off my coat.

Now, let's not jump to any conclusions: the rally was no storming of the Bastille, no Bolshevik revolution, and, thanks to Russia's state-controlled TV, no media sensation. And by bickering with each other, the protesters made sure it was no political breakthrough either.

The squabble between Alexeyeva and Limonov shows how far Russia's opposition is from becoming a coalition force, capable of posing a real threat to the incumbent leadership.

But the very fact that the rally was sanctioned indicates that the Kremlin is becoming increasingly tolerant of the growing opposition movement, although observers warn this may be short-lived.

How long this thaw may last, I don't know, but of one thing I'm sure: when a guy's getting screwed, he's got a right to holler.