Peter the Great ready to set sail for the Baltic 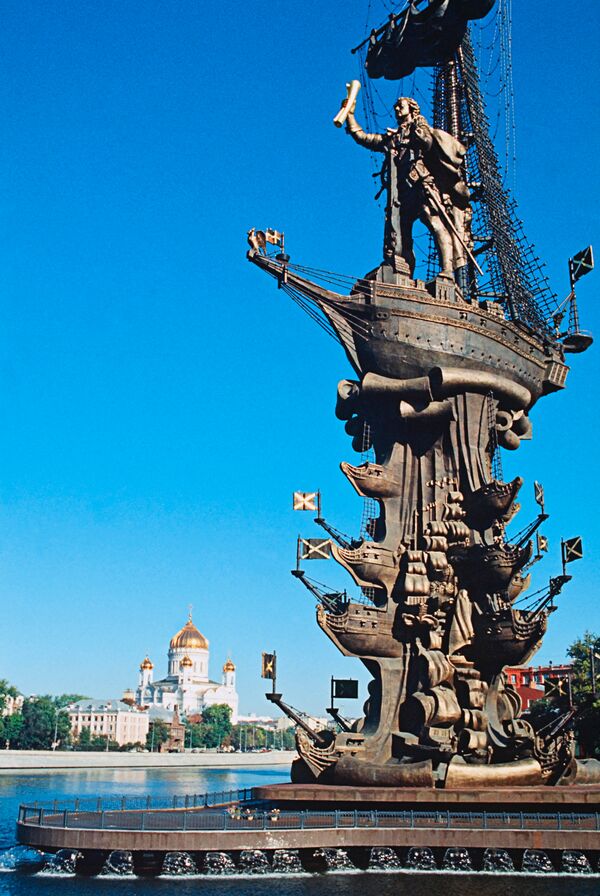 Sculptor Zurab Tsereteli's monument to Peter the Great in the middle of the Moscow River, one of the tallest outdoor statues in the world, has been dividing public opinion in the Russian capital ever since it was erected there in 1998.

Sculptor Zurab Tsereteli's monument to Peter the Great in the middle of the Moscow River, one of the tallest outdoor statues in the world, has been dividing public opinion in the Russian capital ever since it was erected there in 1998.

After ten-odd years of bickering - and at least one attempt to blow up the monument - Peter may finally be on his way out of Moscow, after acting mayor Vladimir Resin raised the question this weekend of moving the edifice.

Possible destinations include the tsar's own city, St. Petersburg.

Towering an impressive 98 meters high over downtown Moscow, just south of the Kremlin, it has also been voted the 10th ugliest structure in the world - hardly a source of pride for Tsereteli, the veteran Georgian-born sculptor, whose grandiose and often obscure creations are dotted across Moscow - frequently attracting the disapproval of the capital's citizens.

The statue depicts Peter the Great, or Peter the Terrible as locals call him, in a somewhat surreal Roman getup, atop a greenish galleon, topped by an aircraft warning light. Few people took to it the way Tsereteli's patron, ex-mayor Yury Luzhkov, had probably expected when he commissioned it for the 300th anniversary of the Russian Navy.

There is little wonder Peter looks disgusted. The monument, the size of the Statue of Liberty, was meant to depict Christopher Columbus, but neither the Americas nor Spain went for it. So Tsereteli knocked Christopher's head off and put Peter's in its place.

And there's another reason for Peter to be morose: he stands moored in the middle of the city he was reputed to dislike, to despise even; the city that rivaled his own, St. Petersburg, which he designated as Russia's capital in 1712.

So little wonder, too, that the monument is regarded by most Muscovites as an eyesore that ruins the view of the embankment skyline.

Mikhail Moskvin-Tarkhanov, who chairs the Moscow City Duma committee on city development, says moving the monument will set the capital's budget back by up to 1 billion rubles ($32.7 million), half of what it cost to build it.

He said the City Hall should ask Muscovites first about what they think of getting Peter out of sight.

"It's been standing there for a long time now; that's why Muscovites should be asked if they want its relocation now," he said.

He added that the relocation may spark calls for moving other controversial monuments across the city, including Tsereteli's other masterpiece - the pillar of friendship between Russian and Georgian peoples on Tishinskaya Square, often referred to as the "kebab."

While there are many ideas around as to where the monument may be moved, Federation Council Speaker Sergei Mironov has come up with by far the boldest, and probably the most obvious one: to dispatch it to St. Petersburg.

"It looks a little strange in its place in Moscow, and when I saw it for the first time, it hit me that the monument should be placed in the Gulf of Finland, where there is an entrance to St. Petersburg; he'd look fantastic there," Mironov said.

Tsereteli said the idea was shameful.

"It is a shame for them [the monument's opponents], but an advertisement for me," Tsereteli told RIA Novosti. "Those who do not love their tsars are not patriots, they are all underlings who want to get into the City Hall."

Despite all the controversy surrounding his monument, Tsereteli is still getting a lot of international commissions, and more striking perhaps, international acclaim. He says he is busy finally delivering a Columbus statue to the United States, only this time a 126-meter one.