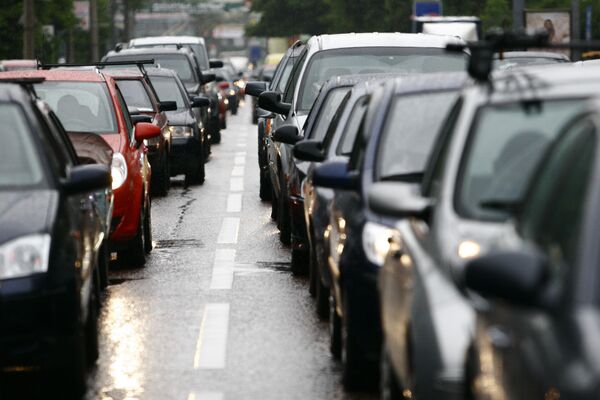 © RIA Novosti . Ivan Makeev
/
Go to the mediabank
Subscribe
International
India
Africa
Moscow joined other global cities in declaring Wednesday a car-free day but the streets of the Russian capital were still overwhelmed with cars during morning rush hour.

Moscow joined other global cities in declaring Wednesday a car-free day but the streets of the Russian capital were still overwhelmed with cars during morning rush hour.

It is the third time Moscow has participated in World Car Free Day, which is marked annually on September 22, but many commuters said they found themselves stuck in worse traffic jams than usual.

"I decided to take part in the action and took a minibus to get from my house to an exhibition in northwestern Moscow," local resident Yury Shchegolkov said. "I was stuck in a terrible traffic jam on the Moscow Ring Road and spent two hours there."

The global initiative is intended to reduce air pollution so to encourage Muscovites to move from their cars to buses the city government halved the price of above-ground public transportation tickets, which cost 12 rubles ($0.4) instead of 24 rubles on Wednesday.

Ivan Korzun didn't leave his car at home, and he said his commute took longer than usual.

"Strange as it may seem, but today, when the world marks Car-Free Day, it took me almost two hours to get to work instead of one. It looks like the number of cars on Moscow's streets doubled," said Korzun, 31.

The Moscow government disagrees, saying the initiative does yield results.

Moscow Deputy Mayor Pyotr Biryukov told reporters on Wednesday that while walking to his office in the morning, he noticed that there were fewer cars in downtown Moscow.

"I often take a walk to see how the city is working. One can see flaws better this way than through the car window," he said, adding that this can help one "take an effective decision."

Not everyone, however, can walk to work - it takes at least an hour to get to the city center from Moscow suburbs by public transport.

Traveling by car is often even worse, taking two or even more hours because of traffic jams, but many Muscovites prefer it to the morning hustle of the packed subway.

"This action is nonsense. Who will choose the metro over their comfortable car?" says Irina Ryapolova, 30. "There are too many people in the metro, and most probably you will not have a chance to sit down. Besides, there are sometimes homeless people in a train carriage who smell really bad."

After a man in the metro hit her with his portfolio in the morning rush, Ryapolova says she is not going to take part in any car-free campaigns.

But other Moscow residents are ready to take a chance - not only for the sake of ecology.

"I went by metro today. I believe that the action is important because it will give an opportunity to those drivers who really need to go by car to do it freely," said 46-year-old Muscovite Sergei Safronov.

Many residents of the Moscow Region, who work in the capital, use suburban electric trains to get to the city. Andrei Piskunov, a resident of the town of Troitsk, 20 kilometers to the south-west of Moscow, does not have such an opportunity.

"There is no railway station near my house. You can only get from Troitsk to Moscow by motor transport, and it is much more comfortable to travel by your own car," he says, adding that if there were trains linking his town with the capital, he would most probably use them from time to time.

There are 3.6 million cars in Moscow, home to an estimated 16 million people, and the number of vehicles is growing. On last year's Car-Free Day, when Moscow also saw huge traffic jams, 16 Russian regions joined the initiative.

This year, the Moscow deputy mayor said, 22 Russian regions were asking residents to get rid of their cars for a day to support the global move, which some countries have been staging since the 1990s.