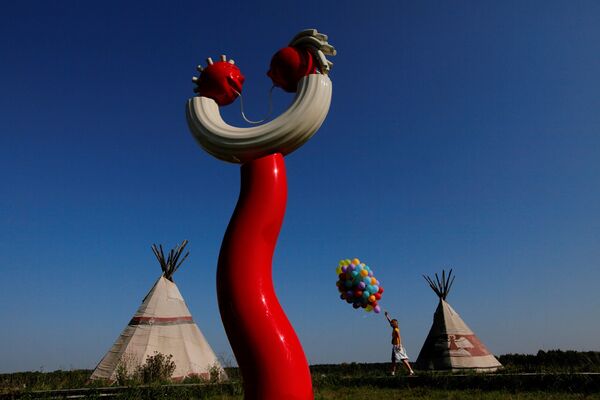 © RIA Novosti . Alexey Kudenko
/
Go to the photo bank
Subscribe
The Mamakabo art festival, hosted at the Etnomir cultural and educational center in the Kaluga Region, has come to an end, the Kaluga Region’s culture ministry said.

“Dozens of Russian and foreign musicians playing various styles and genres of music performed during the four-day festival. There were several spectacular performances, including those by Mamakabo’s regular participants like Sergei Nazarov’s Theater of Sand and Vladimir Zakharov’s ‘2 plus

According to the Kaluga Region’s Culture Minister Alexander Tipakov, the Mamakabo festival featured music that is rarely heard on radio or TV.

Large families, socially excluded and disabled people were all granted free admission to all the festival’s events while local residents received a 20% discount, the official added.

“This program will address both organizational and financial issues,” the minister said.

Mamakabo’s general producer Timur Vedernikov emphasized that the festival had been very well organized. He also supported the idea of the festival being held at the Etnomir center in the future.

“Etnomir is the ideal venue for Mamakabo, it’s a perfect fit,” Vedernikov said.