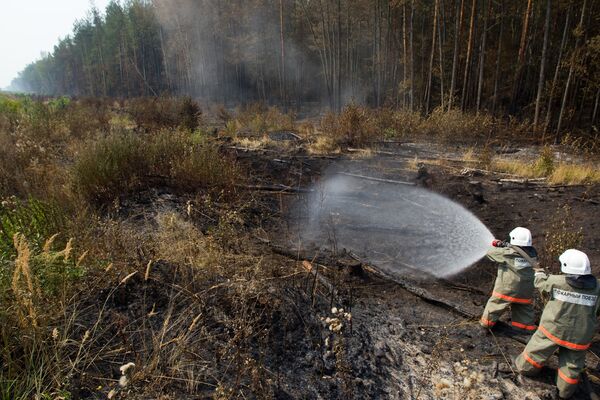 © RIA Novosti . Mikhail Fomichev
/
Go to the photo bank
Subscribe
Areas affected by wildfires in Russia shrank by 15,000 hectares over the past 24 hours, the Emergency Situations Ministry said on Friday.

Areas affected by wildfires in Russia shrank by 15,000 hectares over the past 24 hours, the Emergency Situations Ministry said on Friday.

The ministry said as of Thursday morning the territory engulfed by wildfires was 81,000 hectares.

Vladimir Stepanov, head of the ministry's crisis response center, said the situation had stabilized in Ryazan Region while in Moscow Region the wildfire area had shrunk by 50 hectares.

He said crisis response teams and equipment were being reinforced in Sverdlovsk and Vladimir Regions with resources transferred from areas where the situation had come under control.

Ministry spokeswoman Irina Andrianova said the number of extinguished wildfires was 20% higher than the number of fresh outbreaks.

A scorching heat wave has gripped much of European Russia since mid-June, which coupled with the worst drought since the 1970s has made the countryside particularly susceptible to wildfires.

Thousands of emergency workers and military personnel have been working round the clock for almost three weeks to fight fires in 22 Russian regions, which have so far killed more than 50 people and left over 3,500 homeless. The immediate economic cost of the fires has been estimated at $15 billion.