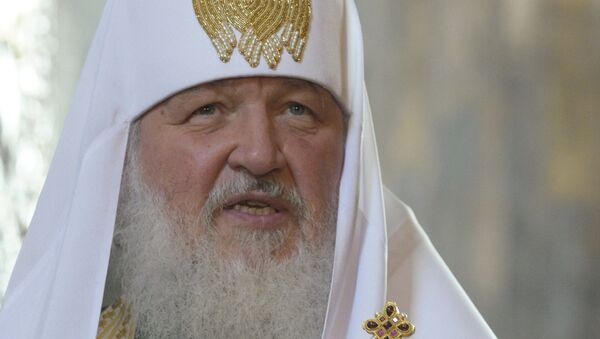 The head of the Russian Orthodox Church described Ukrainian President Viktor Yanukovych as "a dedicated believer" during a discussion on Russian TV channel Rossiya 24 about his recent visit to Kiev.

The head of the Russian Orthodox Church described Ukrainian President Viktor Yanukovych as "a dedicated believer" during a discussion on Russian TV channel Rossiya 24 about his recent visit to Kiev.

"We spoke about many things. It is very important to me as a pastor. I do not assess events from a political point of view. I am not an economist and do not have the opportunity to analyze things from an economic viewpoint," Patriarch Kirill of Moscow and All Russia said.

"But as a pastor, I treat with attention all that happens in people's souls and consciousness," he said, adding that he is satisfied with the level of dialogue with Ukrainian officials and public figures.

Patriarch Kirill arrived in Ukraine on a pastor's visit on July 20. He has already visited the cities of Odessa and Dnepropetrovsk. His visit to Kiev ends on Wednesday.

"As a politician, he [Yanukovych] is guided by the Orthodox Christian ideology, and he is a dedicated believer. Within the limits of law and the Constitution, as the president should do, he serves the cause of spiritual enlightenment of his nation," Kirill said.

In February, Yanukovych invited the Russian patriarch to his inauguration ceremony, triggering criticism from the rival Ukrainian Orthodox Church,  the Kiev Patriarchate, which seeks to end the Moscow Patriarchate's control of the church in the country. Kirill then blessed the presidency of Yanukovych.

The Russian Church hopes that under Yanukovych, who is keen to improve relations with Russia and supports the Moscow Patriarchate, the split may be overcome. The task seemed less likely under former western-leaning president Viktor Yushchenko.