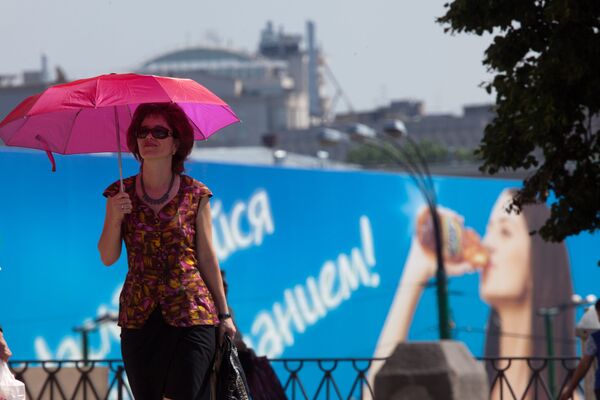 July 2010 has become the hottest month on record in Moscow, a source in the city's meteorological bureau said on Friday.

July 2010 has become the hottest month on record in Moscow, a source in the city's meteorological bureau said on Friday.

A heat wave has gripped Moscow since mid-June and there are no signs the temperatures will fall below 30 degrees Celsius (86 degrees Fahrenheit) in the near future.

"Temperatures like this have not been recorded in 130 years," the source said adding that next week temperatures may reach 38 degrees Celsius (over 100 degrees Fahrenheit).

The worst drought in almost three decades came to the Moscow Region, which is also suffering from forest fires.

The heat forced Muscovites to bathe in the city's fountains and to choose light beachwear for outings and even subway trips.

The lucky owners of country houses, or dachas, have raided shops and online stores for inflatable pools, while it is almost impossible to buy an air conditioner or a ventilator in Moscow.

Due to the heat, the Army has allowed its soldiers to roll up their sleeves and unbutton their shirts.

The traditional changing of the infantry and cavalry guard at Cathedral Square near the Moscow Kremlin was cancelled on July 17 and will not take place on July 24 since it will be too hot for the sentries to wear their traditional early 20th century woolen parade uniforms and the horses are in danger of heatstroke.

According to environmentalists, the heat wave in Russia has been caused by man-made global warming.