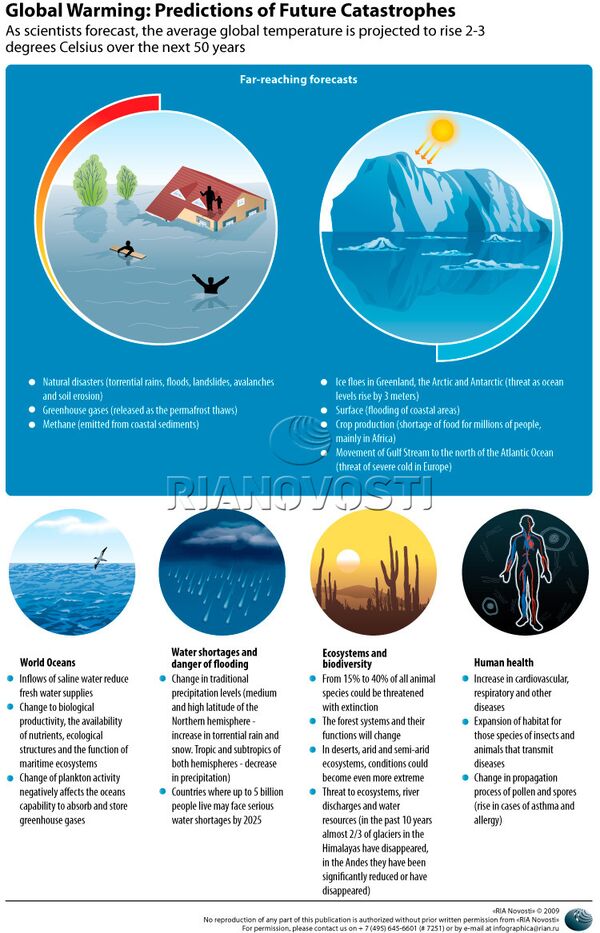 Swedish Prime Minister Fredrik Reinfeldt said on Monday measures being taken to avert global warming are insufficient and called on China to actively cooperate with the European Union on the issue.

BEIJING, November 30 (RIA Novosti) - Swedish Prime Minister Fredrik Reinfeldt said on Monday measures being taken to avert global warming are insufficient and called on China to actively cooperate with the European Union on the issue.

"The global efforts put on the table for mitigation [of greenhouse gas emissions] are not enough ... More needs to be done," Reinfeldt, whose country holds the rotating EU presidency until the end of the year, said during the 12th EU-China summit in China's eastern city of Nanjing.

The summit is taking place a week before the UN Climate Change Conference in Copenhagen, which is expected to see the signing of a new international document to replace the Kyoto Protocol on climate change, some elements of which expire in 2012.

China, which produces 80% of its electricity from coal, is the world's second largest greenhouse gas emitter after the U.S. However, the country is leading the way in the search for alternative energy sources and technological solutions to clean up its coal power plants.

The Chinese State Council said on Thursday China intends to cut carbon intensity by 40-45% by 2020 compared to 2005 levels.

During the summit, EU and China have signed a range of documents, including the climate-related Near Zero Emission Coal Project and EU-China Environmental Governance Programme.

The United Nations Climate Change Conference will take place in the Danish capital on December 7-18. The goal of the Copenhagen talks is to set new targets for cutting greenhouse gases, and to raise funds to help poor countries tackle effects of global warming.