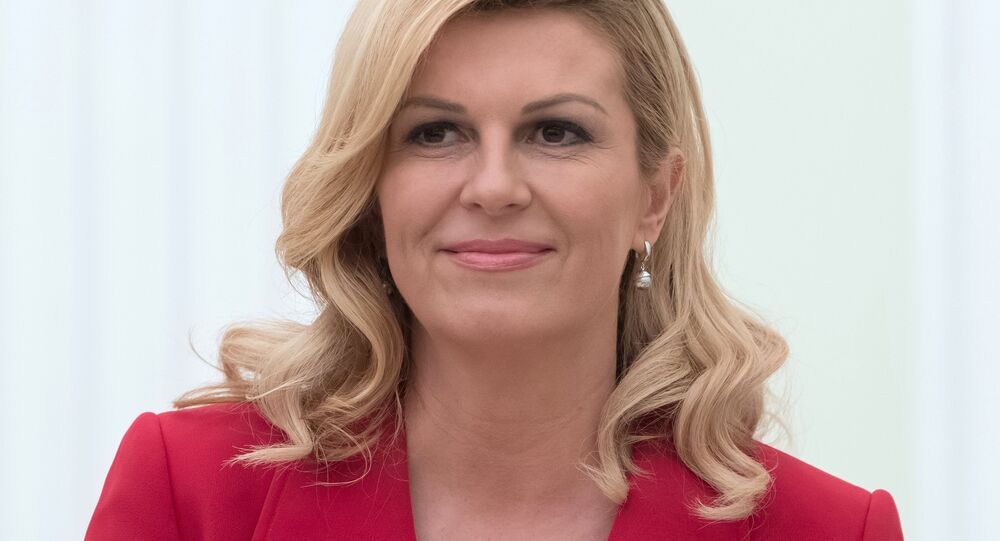 While the French and Croatian squads are readying to compete in the final match of the FIFA World Cup 2018 at Moscow’s Luzhniki Stadium, Croatia’s highest-ranking football fan, President Kolinda Grabar-Kitarovic, is expected to cheer on her team in person.

"I feel extremely excited, I don't know how I will wait until Sunday," said Grabar-Kitarovic, adding that regardless of Sunday's result, “which I believe will be a victory, we are winners."

She has notably grabbed the spotlight during the tournament on more than one occasion – during the Croatia-Denmark clash, as she supported her players from the stands, and several days later joining in the celebrations after her team beat Russia in the quarterfinals. She also backed the Croatian footballers in person as they took on England and gritted out a semi-final victory on Wednesday.

Grabar-Kitarovic is the first woman to have become Croatian president. She had previously pursued a no less brilliant career as Deputy of NATO’s General Secretary for public policies, Croatian ambassador to the United States, Croatia’s European integration minister and finally the country’s foreign minister, before being elected as president by narrowly defeating the incumbent head of state.

The 50-year-old’s perfect looks haven’t escaped the media’s attention, with many heaping praise on her enviable shape and exquisite style. Despite dressing accordingly for formal occasions, she is notable for her down-to-earth style: for instance, she not long ago jetted to one World Cup match in economy class as part of a big crowd of regular football fans.

Unlike other world leaders, her accounts on social network are not verified, as she personally writes posts and frequently shares informal snaps from her official visits across the globe, numerous meetings and social events she eagerly participates in.

Importantly enough, the Croatian president is well-known for an impressively strong personality, which helped her win tremendous popularity with Croatian citizens and abroad.

She took over the reins of government during a period of extreme recession and took successful measures to lead the country out of it. Along with efficient domestic policies, Grabar-Kitarovic  became one of the key negotiators in establishing ties between Iran and Europe, due to the charisma she has demonstrated winning support of over a half of her compatriots.

Her interest in politics has a large part to do with meeting her better half, Jakov Kitarovic: they graduated from Zagreb University together and got married in 1996, later on giving birth to a son and a daughter.

Sport in the Heart

Grabar-Kitarovic has never been indifferent to sports; even in her high-ranking position, she tries not to miss any major sporting events, the FIFA World Cup is certainly no exception.

She cheers on her national squad donning a shirt in the national colors and preferably from the stands, preferring it to a VIP suite with an obligatory dress-code. After the recent triumphs, she joined her team in the dressing room, heartily embracing them and thereby winning the hearts of throngs of social media users.

Zlatko Dalic's side made it to Sunday's final after beating England 2-1 in extra-time on Wednesday. On Sunday, the final World Cup day, Croatia will take on France at 6 p.m. local time at Moscow's Luzhniki Stadium.

Croatian President Thanks Russia in Russian for Hosting 2018 World Cup