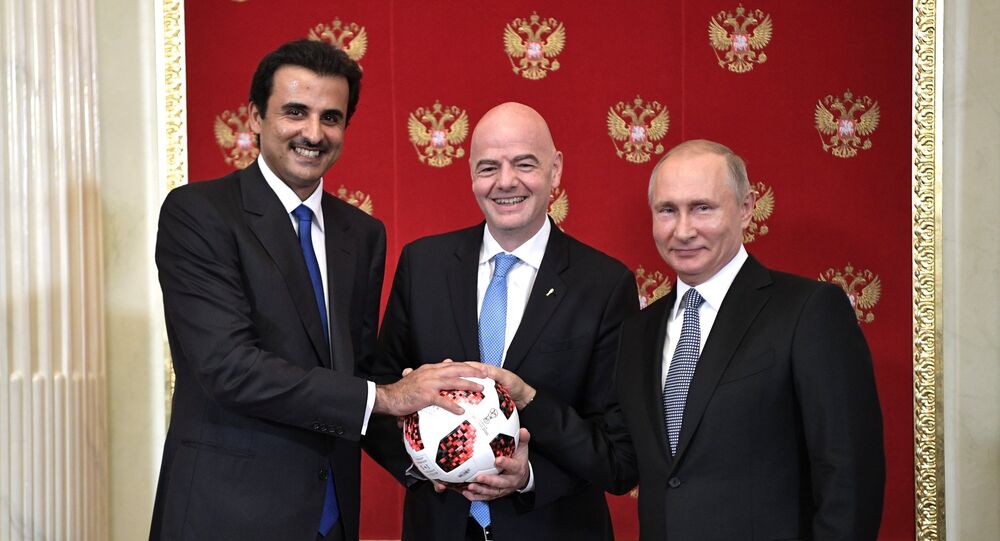 Qatar will host the 2022 World Cup, with the tournament moved to November and December instead of its traditional time frame of June and July, because of the country's climate.

Vladimir Putin, Tamim bin Hamad al-Thani and FIFA President Gianni Infantino have taken part in a ceremony in Moscow on Sunday, July 15, to mark the handing over of the World Cup host country role from Russia to Qatar.

Putin greeted the Qatari guest and handed him the soccer ball as a symbolic relay baton. The ball will later be used during the final matchup of the 2018 World Cup by teams from France and Croatia.

"The World Cup in Russia is coming to an end. We are proud of what we managed to do for fans of this wonderful sport. We, the whole country, received great pleasure from communicating with football, with the world of football, with fans who came to us from all over the world," Putin said.

Russian President Vladimir Putin said on Sunday he was confident that Qatar would be able to host the 2022 FIFA World Cup at the same high level as Russia did this year.

"I'm confident that our friends from Qatar will be able to host the FIFA World Cup at the same high level [as we did]. Of course, we are ready to share the experience we've gained while hosting this year's FIFA World Cup with our friends in Qatar," Putin said during the ceremony of handling the mantle of World Cup hosts that Qatar.

Putin and al-Thani will then hold short talks to discuss Moscow-Doha bilateral relations.