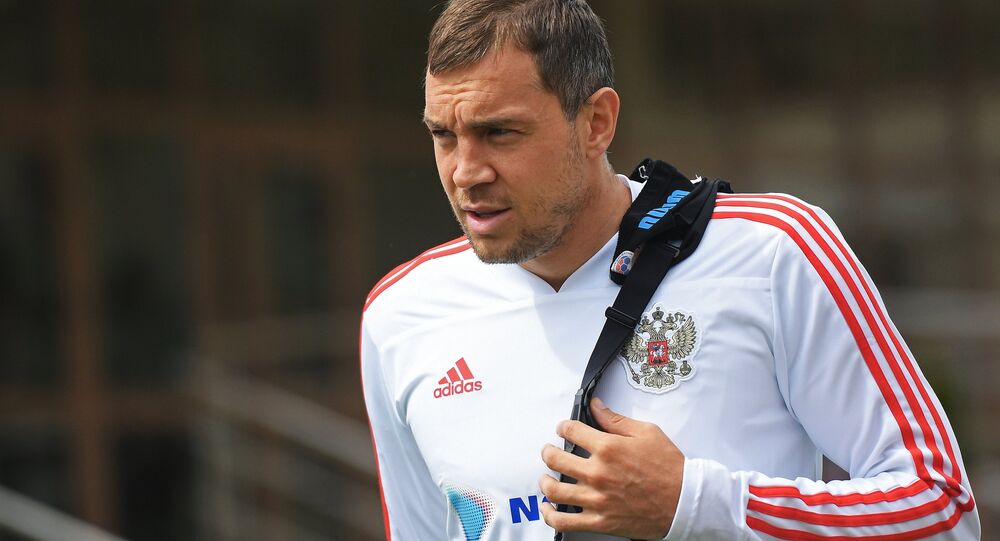 MOSCOW (Sputnik) - Zenit St. Petersburg and Russia striker Artem Dzyuba said that he wanted the whole country to “unite” and support the national team at the 2018 FIFA World Cup, which kicks off on June 14.

"We want to make the country happy [with our results], we know that lots of people believe in us. I assure you that there won't be any indifferent people on the football pitch, everyone will be fighting and struggling," Dzyuba told journalists.

Russia is going into its home tournament on the back of seven straight winless games.

"I'd like to ask you, the journalists, to support us. The tournament hasn't even started, and you're already acting so aggressively. Let the tournament finish, and make… conclusions then… Now I ask the whole country to unite… Many millions of people will root for us," Dzyuba told journalists.

The 29-year-old, who has scored 11 goals in 23 appearances for Russia, added that his team needed support as they were looking to reach the knockout stage for the first time.

"We are preparing for the tournament, we want to win… For us, this is the main event in our lives, we need the support of the whole country… We will fight, we will struggle, and you will judge us then [after the World Cup]," Dzyuba said.

© Sputnik / Vitaly Belousov
Russian Team Training at Full Strength Ahead of 2018 FIFA World Cup
"We have many experienced guys [in the team]… We are playing at home, on our home ground, it's the rivals who should be afraid, we have the twelfth player [the fans]. I want this twelfth player to support us with his heart and soul… Root for us… and then, when the tournament is over, we'll discuss it, you'll say what you want, and we'll answer you," Dzyuba said.

Artem Dzuyba said that the Russian national football team already had a strategy worked out for the 2018 FIFA World Cup opening match, where they will face Saudi Arabia.

"We're learning Saudi Arabia's way of playing. I don't know the surnames, but #7 midfielder [Salman Al-Faraj] is great, the midfield line in general, in general,their center back is quite good, he's a skilled guy. We've noticed that our rivals like counterattacking a lot, they're very fast… We already have a certain plan for the game," Dzyuba told journalists.

Russia will host its first-ever FIFA World Cup from June 14 to July 15 in 11 cities across the country. The host nation will face Saudi Arabia in the opening match of the tournament at Moscow's Luzhniki Stadium on June 14, before also facing Egypt and Uruguay in their Group A.