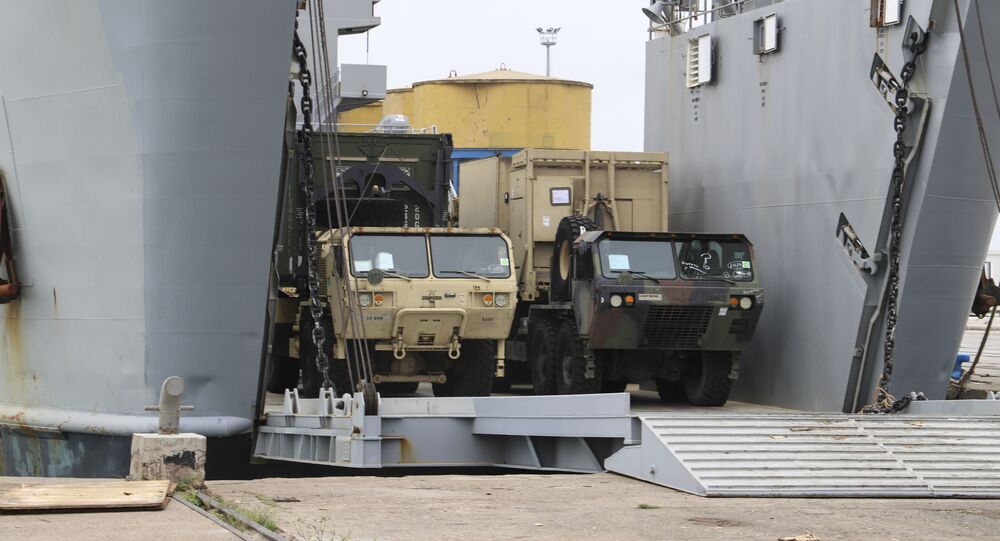 White House ‘Has No Plans’ to Send Troops to Haiti, Possibly ‘Confused’ by Port-au-Prince’s Request

Haitian President Jovenel Moise was gunned down at his residence outside Port-au-Prince on Wednesday by a team of international assassins, prompting authorities to put the Caribbean nation under martial law. On Friday, interim authorities formally asked the US and UN to deploy troops to help secure strategic infrastructure.

The White House “has no plans” to provide direct military assistance to Haiti, Reuters and The New York Times report, citing a senior administration official or officials said to be familiar with the situation.

“There are no plans to provide US military assistance at this time,” an unidentified "senior administration official" was quoted as saying by each of the outlets.

Earlier, a State Department spokesperson confirmed to Sputnik that Haitian authorities requested “security and investigation support” from Washington and said the US was in contact with Port-au-Prince to discuss “how the US can help.” The spokesperson did not respond directly whether the US would send troops to the country. The Pentagon also declined to comment on the troop request, directing Sputnik’s inquiries back to the State Department.

The “no plans” for troops comment comes amid scattered reports of possible confusion inside Washington about exactly what kind of security assistance Port-au-Prince is looking for. One congressional source told The Hill that Haiti’s request has “been framed in this bucket of US security assistance, where in reality the Haitian government made a request for US troops.” Another source said "confusion" may stem from the fact that the French word for “troops” can also refer to police.

Haiti’s interim government announced on Friday that it is formally requesting US and the United Nations boots-on-the-ground assistance to protect key infrastructure to stop “urban terrorists” like those who shot Moise to death at his home from endangering civilian assets through attacks on gas reserves, airports, or ports.

The security assistance request is unusual in light of Haitians’ weariness over the US penchant for rampant interference in the Caribbean nation’s internal affairs. The United States occupied Haiti between 1915 and 1934 in the wake of the assassination of President Vilbrun Guillaume Sam, looting the country’s gold reserves and claiming the occupation was necessary to prevent a German takeover.

During the Cold War, Washington supported the dictatorship of President Francois Duvalier, but turned its back on his son, Jean-Claude Duvalier in 1986, flying him out of the country aboard a US Air Force aircraft. In 1993, the US intervened militarily to restore President Jean-Bertrand Aristide to power after his ouster in a coup in 1991. In 2004, Washington intervened militarily again, this time in support of a coup against Aristide.

© AP Photo / Greg Gibson
President Bill Clinton gestures while meeting with exiled Haitian President Jean-Bertrand Aristide in the Oval Office of the White House in Washington on July 22, 1993. The president meet with Aristide to discuss efforts to return Aristide to power, saying "there's a major potential for a victory for democracy."

On Friday, White House spokeswoman Jen Psaki announced that senior FBI and Department of Homeland Security officials would be deployed to Port-au-Prince “as soon as possible to assess the situation and how we may be able to assist.” Also on Friday, after it emerged that two US nationals were among the suspects in the assassination, State Department spokesman Ned Price said the US was "closely monitoring" the situation but could not comment on specifics “due to the privacy considerations.”

© AFP 2021 / VALERIE BAERISWYL
Haiti Assassination Drama Deepens as Opposition Admits Hiring DC Lobbyist Days Before Moise’s Murder
Moise succumbed to his wounds following in an attack on his residence on Wednesday by a group of heavily-armed mercenaries, with his wife, first lady Martine Moise, also injured in the attack and airlifted to a hospital in Florida in critical condition. On Saturday, the widow confirmed to media that the attack was the work of mercenaries, said she believed the opposition was responsible, and suggested that Moise was killed for his flagship development projects, including the building of roads, the provision of drinking water, and plans to hold a constitutional referendum alongside elections scheduled for September which would have expanded his powers.

“Mercenaries assassinated the president, other mercenaries want to kill his dream and his vision for the country,” Martine Moise, who suffered three bullet wounds during the attack, said.

19 suspects – 17 Colombian nationals and two American citizens of Haitian descent – have been arrested in the wake of Moise’s 7 July killing. Police believe some 28 foreign mercenaries in total were involved in the assassination plot. The two arrested Americans have said that they were working as translators on behalf of a mysterious mastermind identified only as "Mike." After the hit, some of the mercs reportedly attempted to hide in the Taiwanese Embassy and a house belonging to senior Moise ally Magalie Habitant.