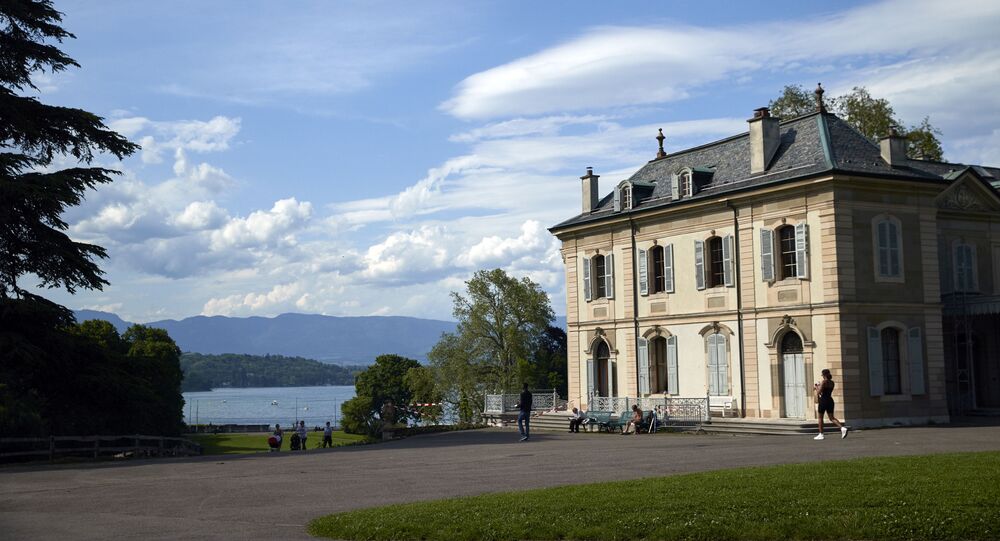 WASHINGTON (Sputnik) Ekaterina Chukaeva - All eyes are on Geneva where Vladimir Putin and Joe Biden will meet face-to-face for the first time in Biden’s presidency, as hopes are high that the two world leaders will reach common ground on a number of issues of global importance, and ease bilateral tensions.

The luxury lakeside Villa La Grange in Geneva's biggest park has hosted landmark international agreements, including the First Geneva Convention in 1864, but the one on Wednesday – a historic meeting between the two world leaders – will probably be the most high-profile. The 18th-century mansion is expected to foster an atmosphere of compromise in the first encounter between the two leaders since Biden ascended to the presidency earlier this year. Close advisers from both sides will join the event, including US State Secretary Antony Blinken and Russian Foreign Minister Sergey Lavrov.

The meeting with the Russian leader is the last – but far from the least – in Biden’s tight schedule on his overseas tour of Europe. Before Putin, the American president has already reconnected with G7 and NATO allies, and held meetings with EU leaders, including German Chancellor Angela Merkel and French President Emmanuel Macron.

The upcoming negotiations are to consist of three parts: narrow-format talks and two rounds of extended discussion with a coffee break. The meeting, which will be held under enhanced coronavirus measures, is expected to last 4-5 hours. The presidents will not, however, hold a joint press conference. Putin's presser will take place before the press conference of his counterpart. While the White House says that a conference in such a format would be most suited, media claimed that Biden made his decision based on the allegedly unfavorable impression Donald Trump left after his summit with the Russian president in 2018.

Both the White House and the Kremlin have announced that the leaders are to touch on plenty of topics, ranging from strategic stability, information security and cybercrime, the Arctic, climate change, and the fight against COVID-19. Prospects of trade and investment cooperation between the two countries are also planned to be discussed during the meeting.

The leaders will discuss the Middle East, Syria, Libya, Afghanistan, the situation on the Korean Peninsula, as well as the Iranian nuclear program. Special attention is planned to be paid to Nagorno-Karabakh and Belarus.

The Ukraine crisis will undoubtedly come up during the meeting. The US is also likely to raise the situation with Russia's jailed opposition activist, Alexey Navalny.

As experts speculate which topics should be of primary importance on the agenda, Akira Kawasaki, an International Steering Group member of the International Campaign to Abolish Nuclear Weapons (ICAN), told Sputnik that the presidents should start their talks by considering provisional steps to make the planet nuclear-free.

"Towards the goal of a world free of nuclear weapons, they can start with some interim measures such as de-alerting and no-first use of nuclear weapons and restoring bilateral and multilateral disarmament treaties. For this summit, however, agreeing to the goal and committing to a continued dialogue will be key," Kawasaki said.

Meanwhile, Howie Hawkins, a co-founder of the Green Party of the United States, said that strategic nuclear stability is the most important issue they should address as both sides modernize their nuclear forces.

"If they could make progress on renewing the Intermediate-Range Nuclear Forces treaty that has been abandoned, it would be a big step back from the brink," Hawkins, who was the party's presidential nominee in the 2020 presidential election, said.

US-Russia relations have been in a downward spiral since 2014, after the Obama administration placed sanctions on Russia over Ukraine and Crimea. Washington later accused Moscow of meddling in the 2016 US presidential election. Russia has repeatedly denied interfering in Ukraine and in US politics.

Matters were under threat of total collapse this spring after Biden was asked in an ABC News interview if he considers the Russian president a "killer" and he replied in the affirmative. Putin reacted by saying that he would just "wish him well" and invited Biden to a live debate.

In April, Washington ordered 10 Russian diplomats out of the country, and forbade American financial institutions to buy Russian government bonds at their initial offering, starting 14 June. Russian ambassador Anatoly Antonov and US ambassador John Sullivan returned to their home countries in the wake of the tensions. They will both be present at the summit in Geneva.

The tensions between the two countries continued to intensify in summer, especially after FBI Director Christopher Wray accused Russia of pursuing a state-sponsored cybercampaign against the US. In May, the cyberattack on the Colonial Pipeline fuel transit facility triggered a gas outage crisis across southeastern US states. The attack was attributed to an unknown group of allegedly Russian-speaking hackers. However, Biden said on several occasions that there was no evidence that Russia was involved. Moscow, meanwhile, firmly maintained that it had nothing to do with the attack.

Yet the tone of the presidents seems to be more positive as the summit looms. In his op-ed to The Washington Post, Biden said that the US and its allies are ready to address what they deem to be Russia’s challenges to security and sovereignty, but Washington does not seek conflict with Moscow.

Speaking to NBC ahead of the summit, Putin admitted that the Russian-American relationship had been at its lowest in recent years but added that he was not worried about being called a "killer" by Biden. Putin also indicated that he was open to making a deal on exchanging prisoners.

Russian businessman Viktor Bout has already served half of a 25-year sentence in a US prison on charges of conspiracy to murder American citizens and financially supporting terrorism, while another Russian, pilot Konstantin Yaroshenko, is serving his sentence in the US on accusations of plotting a delivery of large quantities of drugs to the country. Paul Whelan, who is also a citizen of Canada, Ireland and the United Kingdom, was sentenced in Russia for espionage, while a former US Marine, Trevor Reed, was sentenced to nine years in prison in July 2020 for assaulting police officers.

The Kremlin warns that although it awaits the meeting with "practical optimism," it is naïve to expect far-reaching breakthroughs. A number of experts, however, still see a positive sign in the summit.

Sean O'Keefe, a US government official who served in the administration of both George H. W. Bush and George W. Bush, told Sputnik that the meeting may be a good opportunity to ease tensions.

"Convening a summit is a very positive development and hopeful sign that there will be an understanding of views. If so, that opens a search for common ground that is cause for optimism," he said.

Clyde Prestowitz, who served as a counselor to US Secretary of Commerce in the Reagan Administration, in his turn, hopes that the summit will clear up misunderstandings between the leaders.

"I don't expect them to act like best friends. I hope the meeting will clear up any misunderstandings between the two leaders and that the points of agreement and difference will at least be made obvious to the outside world," Prestowitz said.