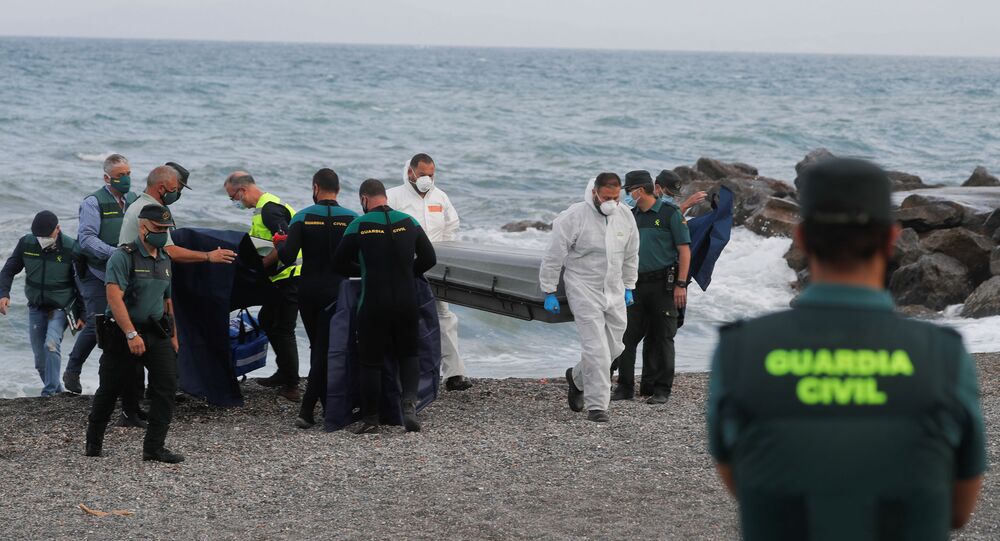 On 17 May, several thousand migrants entered Spain's Ceuta enclave from neighbouring Morocco, setting a record for the number of daily arrivals.

Spain's Prime Minister Pedro Sanchez has described Morocco allowing 10,000 migrants into the Spanish autonomous city of Ceuta as "an assault on the Spanish border."

"It is not acceptable for a government to assault borders because of a foreign policy disagreement," the prime minister said.

© REUTERS / JON NAZCA
Migrants sit outside a facility prepared for them, accompanied by members of a NGO and Spanish police officers, near the Spanish-Moroccan border, after thousands of migrants swam across this border during the last days, in Ceuta, Spain, May 21, 2021

The Spanish prime minister, who had to cancel his trip to a French-led summit on financial aid for Africa due to the Ceuta crisis, said the country rejects its neighbour's "attitude" and the Moroccan foreign minister's earlier comments about the migrant surge.

Thousands of Migrants Make Their Way to Ceuta

An estimated 8,000 migrants from Morocco and Sub-Saharan Africa arrived in the Spanish enclave of Ceuta on 17 May, breaking the record for daily arrivals for the EU state. Around 6,500 were later sent back to Morocco.

Morocco has been accused of loosening its border controls in retaliation to Spain's decision to host the leader of Western Sahara’s rebel national liberation movement Polisario Front, Brahim Ghali, for medical treatment.

© REUTERS / JON NAZCA
A Moroccan boy cries as he is helped to his feet by Spanish soldiers after thousands of migrants swam across the Moroccan-Spanish border, in Ceuta, Spain, May 19, 2021

Following Spain's move to accept Ghali for medical treatment, Morocco withdrew its ambassador to Spain, with Foreign Minister Bourita saying that Madrid "needs to understand'' that Rabat is now ready to take a more assertive stance on the issue.

"If there is a problem or a crisis it is because Spain preferred to act and coordinate with the adversaries of Morocco against the feelings of the Moroccan people in relation to a fundamental issue for the kingdom," Bourita said shortly after thousands of would-be-migrants poured into Ceuta in the mid-May.

Bourita has rejected accusations that Rabat was blackmailing Spain with the border issue. Instead, he said the situation demonstrates the “burden" Morocco carries due to the migrant surge into Spain because so many security personnel are required to cope with it. He also warned that the warming climate is making it easier for migrants to swim to Ceuta.