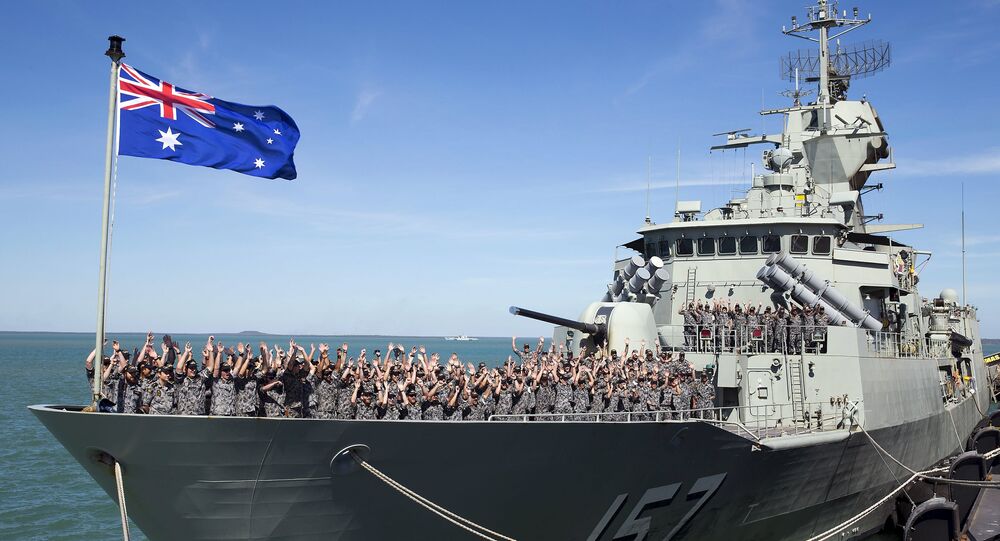 Last week, an Australian naval ship joined forces with the US, France and Japan in the East China Sea for a first-ever joint military exercise between the four nations, titled Exercise Jeanne d'Arc 21.

Chinese experts are deemed “propagandists” by Britain’s the Daily Mail tabloid after saying that Australia’s military is “too weak to be a worthy opponent of China.”

Japan, France, Australia and the US held military drills between 11 and 17 May in southwestern Japan, as forces practiced anti-aircraft defence, land and sea exercises, as well as urban warfare.

Speaking to China’s state-run media outlet the Global Times following the launch of the operation, a military affairs expert, Song Zhongping, said that the drill “will not be a threat to China, because it was only scraped together.”

The Chinese spokesperson added that Australian forces would be among “the first to be hit” if Canberra decided to interfere in a conflict with Beijing over the Taiwan Strait.

"Australia must not think it can hide from China if it provokes,” Song hinted.

"The People's Liberation Army (PLA) doesn't even need to make pointed responses to the joint drill since it's insignificant militarily,” the article added, quoting unnamed analysts.

Other observers have pointed to the newspaper that Australia was “within range of China's conventional warhead-equipped DF-26 intermediate-range ballistic missile.”

The analysis was described by the Daily Mail reporters as a “chilling message in the Communist Party mouthpiece” as they warned about an “authoritarian state” becoming “increasingly aggressive in its disputed territories.”

This comes as Britain’s HMS Queen Elizabeth flagship is heading towards the Indian-Pacific region for a 28-week operational deployment as a “response” to China’s growing presence.

The ship, which carries eight RAF F-35B stealth fighter jets and is accompanied by six Royal Navy ships, 14 helicopters and a submarine, will visit at least 40 countries, including Japan and India. The task group is also expected to take part in a celebration of the 50th anniversary of the Five Powers Defence Agreement with Australia, New Zealand, Malaysia, and Singapore.

Chinese-Australian relations have been strained over the last two years despite a massive volume of trade between the two states following Canberra’s accusations of cyber-attacks on Australia’s parliament alleged to have originated in China. It also called on Beijing to be more transparent about the global COVID pandemic and demanded an independent investigation into the matter, something Beijing suggests will contribute to growing anti-Asian sentiment.