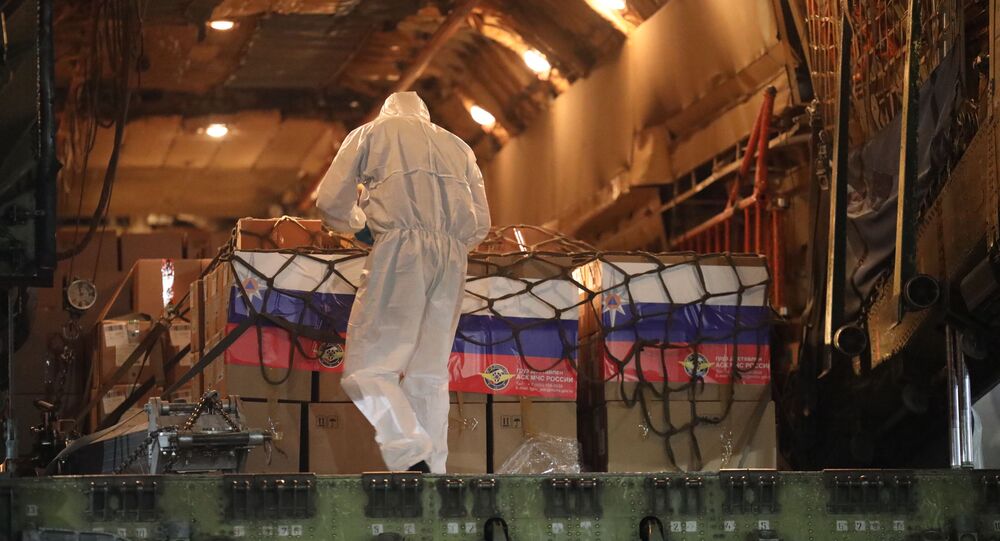 NEW DELHI (Sputnik) – The second out of two planes of the Russian Emergencies Ministry with aid for India, which is hit by the unprecedented outbreak of COVID-19, landed on Thursday in New Delhi, a Sputnik correspondent reported.

According to the Russian Emergencies Ministry, India will receive over 22 tonnes of anti-coronavirus equipment and drugs, including 20 units of oxygen equipment, 75 lung ventilators, 150 medical monitors and 200,000 packages of medicines.

© Photo : EMERCOM of Russia
Russia delivers humanitarian assistance to India, which has been hit by an unprecedented outbreak of coronavirus.

The Russian Ministry of Industry and Trade said all high-tech equipment, as well as Favipiravir drug, are Russian-produced.

On Wednesday, the Kremlin said that Russian President Vladimir Putin had held a phone conversation with Indian Prime Minister Narendra Modi and told him about the decision to provide the south Asian nation with emergency aid amid the COVID-19 crisis. The first plane landed in New Delhi in the early hours of Thursday.

India has been struggling with a new wave of the pandemic since mid-February, continually setting daily records in new cases, while the official death toll topped 200,000 on Wednesday.

© Photo : Emercom of Russia
Both planes of the Russian Emergencies Ministry with aid for India, which is hit by an unprecedented outbreak of COVID-19, have landed in New Delhi.

Last week, some states, including Germany, Iran and Canada, temporarily limited the passenger traffic with India after a new variant of the coronavirus with triple mutation — variant B.1.618 — had been discovered in the West Bengal state. Indian scientists believe that the new variant transmits faster than any previously known ones and infects old and young alike.

According to Russian researchers, its Sputnik V vaccine will also be effective against the Indian mutation of the coronavirus.