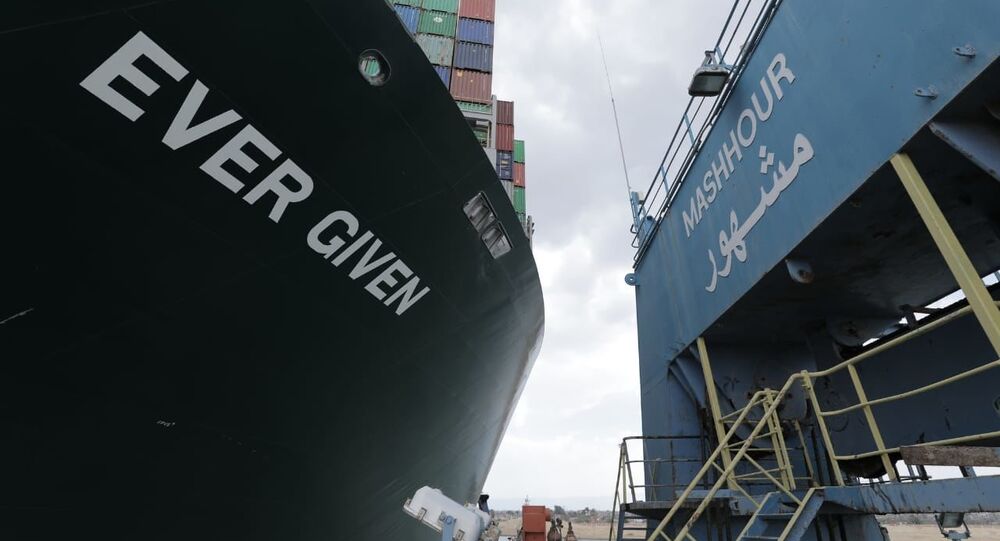 Maritime traffic through the Suez Canal, a crucial global trade waterway, has been blocked since early 23 March after a Japanese container vessel, the Ever Given, ran aground, with eight tugs working in vain to release the 400-metre-long ship.

The US Navy is reportedly planning to send a team of dredging experts to the Suez Canal to help dislodge the Ever Given container ship after efforts to re-float the vessel that has been blocking one of the world’s busiest waterways since Tuesday failed.

The huge ship stuck in the Suez Canal is visible from space (satellite photos) https://t.co/ezeSibO6pZ pic.twitter.com/DKUMzeRFln

​The US Navy in the Middle East will send its assessment team to advise local authorities after the Egyptian administration agrees to accept the offer, conveyed through the US Embassy in Cairo, according to two officials from the Department of Defence, cited by CNN.

“As part of our active dialogue with Egypt, we have offered US assistance to Egyptian authorities to help re-open the canal. We are consulting with our Egyptian partners about how we can best support their efforts,” a US official was quoted as saying, after acknowledging that the administration of President Joe Biden was “tracking the situation closely”.

​Referring to the disruption caused by the incident to maritime traffic, the White House said earlier that it has seen “some potential impacts on energy markets”.

“We have equipment and capacity that most countries don’t have, and we’re seeing what help we can be.”

The offer of help with the massive container ship that ran aground in the Suez Canal was applauded by the Suez Canal Authority (SCA), which said in a statement on Friday that it “values the offer of the United States of America to contribute” to efforts to dislodge the Ever Given.

© Photo : The Suez Canal Authority
A dredger attempts to free stranded container ship Ever Given, one of the world's largest container ships, after it ran aground, in Suez Canal, Egypt March 26, 2021

The SCA added that it “looks forward to cooperating with the US in this regard in appreciation of this good initiative which confirms the friendly relations and cooperation between the two countries”.

In an earlier statement on Friday night Lieutenant General Osama Rabei, head of the Suez Canal Authority, said that dredgers had stopped removing sand around the bow of the ship, while tugboats were preparing for another towing attempt.

The vessel, operated by the Taiwanese company Evergreen Marine, was blown sideways by 40-knot winds and a dust storm, with no reports of injuries among the 25 crew members, all Indian nationals, or cargo damage.

Mechanical or engine failure have since been ruled out as a possible reason for the incident, according to a preliminary investigation.

So, the #SuezCanal is blocked...

Massive container ship EVER GIVEN stuck in the most awkward way possible.

Ongoing for hours. Every tug Egypt could spare appear to be trying to pull it free.

​Despite extra tug boats drafted in and water pumped out of the ship, all attempts to re-float the Ever Given failed on Friday, according to the vessel’s technical manager, Bernhard Schulte Shipmanagement (BSM).

“The focus is now on dredging to remove sand and mud from around the port side of the vessel’s bow. A specialised suction dredger, which can shift 2,000 cubic metres of material every hour, arrived on site on 25 March. Arrangements are also being made for high-capacity pumps to reduce the water levels in the forward void space of the vessel and the bow thruster room,” said BSM in a statement.

Satellite images taken after the incident have shown a congestion of ships on either end of the waterway which nearly 19,000 ships passed through during 2020, at average of 51.5 per day, according to the Suez Canal Authority.

Over 200 vessels were seen waiting in a marine traffic jam near the canal, with more than 100 ships en route to the waterway, according to the data firm Refinitiv.

Incredible view tonight of the #Suez Canal blocked in both directions by one of the largest containership in the world (#EverGiven, 9811000) stuck sideways due to a power outage. Explore the global vessel movements via Refinitiv #Eikon’s Interactive Map: https://t.co/BW0BiIbVeO pic.twitter.com/dhg8Ufw0bC

​To bypass the blockage, other ships had been diverted to a route via the Cape of Good Hope.

About 10 percent of the world trade flows through the Suez Canal. Its closure could affect oil and gas shipment, as well as shipments of livestock and other products, to Europe from the Middle East and Asia.

As experts warn that it could take weeks to dislodge the ship, the blockage of westbound maritime traffic is costing roughly $5.1 billion a day, and eastbound traffic - around $4.5 billion a day in delayed goods, according to shipping news journal Lloyd’s List.

“The blockage is further stressing an already strained supply chain… Many companies continue to struggle with supply chain congestion and delays stemming from the pandemic. There is no doubt the delays will ripple through the supply chain and cause additional challenges,” Jon Gold, vice president of supply chain and customs policy for the National Retail Federation, was quoted as saying by CNBC.

The Japanese owner of the Ever Given, Shoei Kisen Kaisha, expressed hope that the vessel would be freed by Saturday night Japan time, in a statement on Friday.

Major Inconvenience: Behold Ever Given, The Ship Blocking Suez Canal