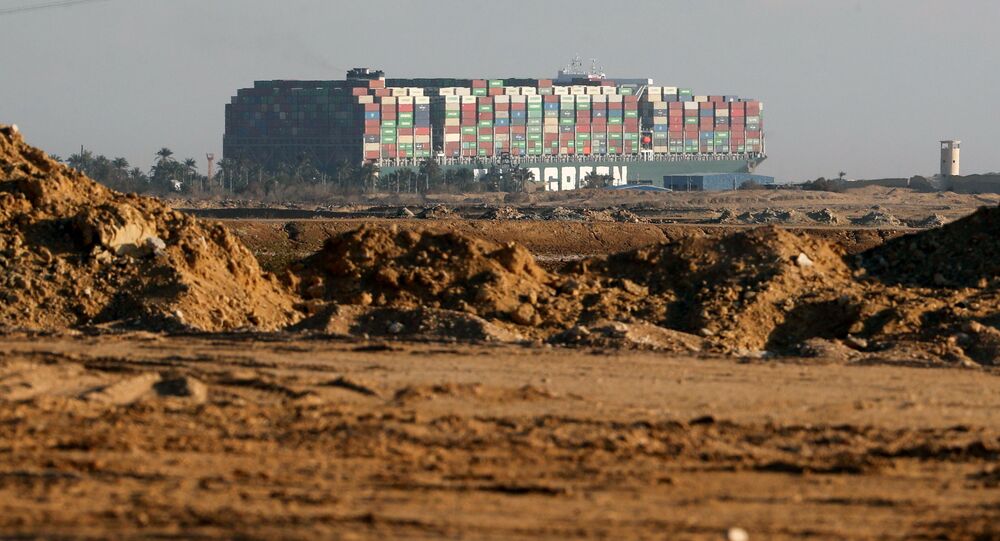 Ever Given: Owner of Cargo Ship Blocking Suez Canal Reveals When Vessel May be Refloated

On Friday, global shipping companies started to reroute their cargo from the Suez Canal after a giant container ship, the Ever Given, blocked maritime traffic in one of the world's busiest waterways.

The Japanese owner of the Ever Given container ship, still blocking the Suez Canal, suggested on Friday that refloating work may wrap up "tomorrow night Japan time" but that no guarantee can be given.

A spokesperson for the company Shoei Kisen Kaisha told local media that even though an operation to refloat the vessel is under way, no clear-cut end point is in the offing.

"We don't have an estimate for when the work will succeed", the spokesperson added.

The statement followed the company "sincerely" apologising for "causing a great deal of concern to the vessels scheduled to sail and all related parties while navigating the Suez Canal".

© Photo : The Suez Canal Authority
Stranded container ship Ever Given, one of the world's largest container ships, is seen after it ran aground, in Suez Canal, Egypt March 26, 2021

Referring to the "extremely difficult situation", the firm made it clear at that time that clearing the passage may take weeks.

Shoei Kisen Kaisha explained the Ever Given got stuck as a result of "stormy weather" that forced the vessel to run aground, adding that it was working with maritime solutions provider Bernhard Schulte Shipmanagement to resolve the situation.

© REUTERS / HANDOUT
Cargo Ship Ever Given Drew 'Penis' in Red Sea Before Being Stuck in Suez Canal, Tracking Data Shows
International shipping companies have, meanwhile, begun to reroute their cargo from the Suez Canal, with data intelligence company Kpler analyst Rebecca Chia warning that at least 16 LNG vessels' planned transit via the canal "will be affected if the congestion persists until the end of this week".

Earlier, the Suez Canal Authority announced a temporary halt to maritime traffic as eight tugs are working to release the 400-metre-long Ever Given, which was on its way from China to the Netherlands when it became stranded in the Suez Canal on Tuesday and blocked traffic in one of the world's key trade arteries.