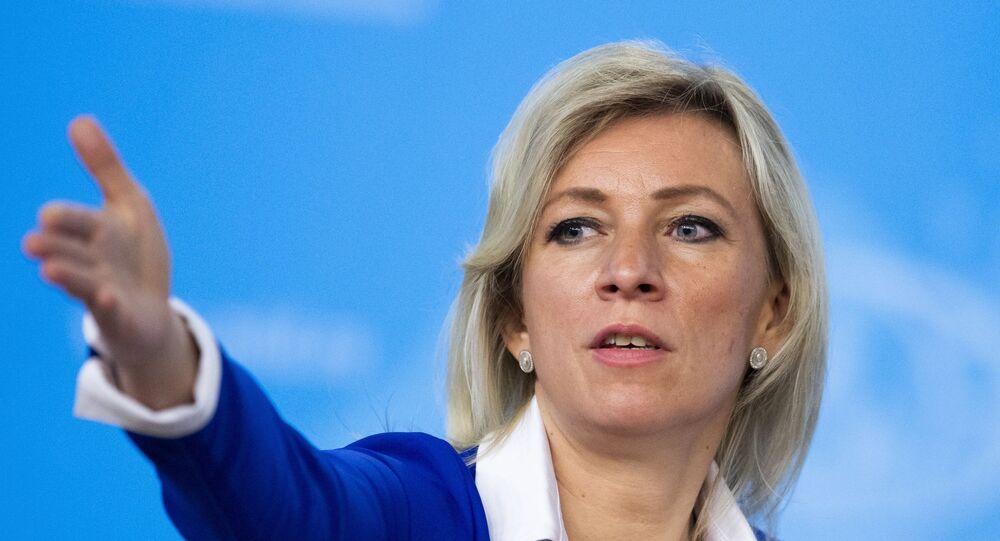 MOSCOW (Sputnik) - Social media platforms should not prohibit any political content during elections, as it is necessary to provide people with an opportunity to express themselves, Russian foreign ministry spokeswoman Maria Zakharova said in an interview with Sputnik.

"For example, if elections are held in a country, if social networks position themselves as platforms where a person, association, non-governmental organization can express their point of view, it is necessary to give people an opportunity to express themselves and speak on these topics just before the elections instead of manipulating buttons and banning political ads", Zakharova said.

© AP Photo / Martin Meissner
Google to Lift Political Ad Ban Imposed After Deadly Capitol Riot
According to the diplomat, the blocking of political content, political advertising on the eve of elections in a particular country "is evidence of a selective, discriminatory approach and violation of freedom of speech by these very platforms".

"There must be rules, each country or sovereign state has rights or the right to its own legislation. No one can claim this, I mean, from the outside. But these rules should be clear, clearly formulated, and not change from time to time simply under pressure from one or another lobbying group or political group. This is a very big problem, and of course, it requires a solution", the spokeswoman added.

Social media giants have repeatedly blocked political content in recent months. In particular, from mid-January to late February, Google banned political advertising on its platforms following the January 6 unrest at the US Capitol. Facebook, in turn, introduced a temporary ban on political, social issues and election-related advertisements after the 2020 US presidential election on November 5, saying it seeks to "avoid confusion or abuse following Election Day".

The Russian Foreign Ministry spokeswoman believes that the activity of internet giants, that either block or remove political content, needs regulation,

"All this requires regulation. All of this is now being dealt with by our [Russian] legislators and relevant authorities. We believe that there should be some kind of common international legal approach to internet regulation", Zakharova said.

According to the spokeswoman, the fact that social media profiles belonging to Russian media outlets are often blocked can be described as "a clean-up" of information.

Zakharova added that Moscow has been proposing initiatives in the field of information security for years. She mentioned that the upper house of the Russian parliament has issued a special appeal to international organizations on the need to develop a common approach to the issue.

She stressed that the decisions of western internet giants often go sideways with Russian law and this is unacceptable.

© AP Photo / Evan Vucci
Trump’s 2020 Campaign App Scrubbed From Google Play Store for ‘Dysfunction’, Sparking Speculations
"This is really a problem that has escalated, probably in recent years, especially in 2020. We assume that the internet is a common space. But we see how they behave outside the legal framework if we talk about the jurisdiction of our country, our legislative framework, the very companies that you call internet giants [behave outside the legal framework]", Zakharova explained.

The spokeswoman added that such big tech companies sometimes "directly break Russian laws" and refuse to pay fines that are imposed for such violations. Zakharova added that other countries also face similar issues.

She mentioned Australia, where the parliament passed a new law that requires digital platforms to pay news outlets for content and France, "where individuals and public figures filed lawsuits against American internet platforms in connection with the blocking" of content. The spokeswoman also said that the ban of "US politicians" on social media "shocked the whole world".