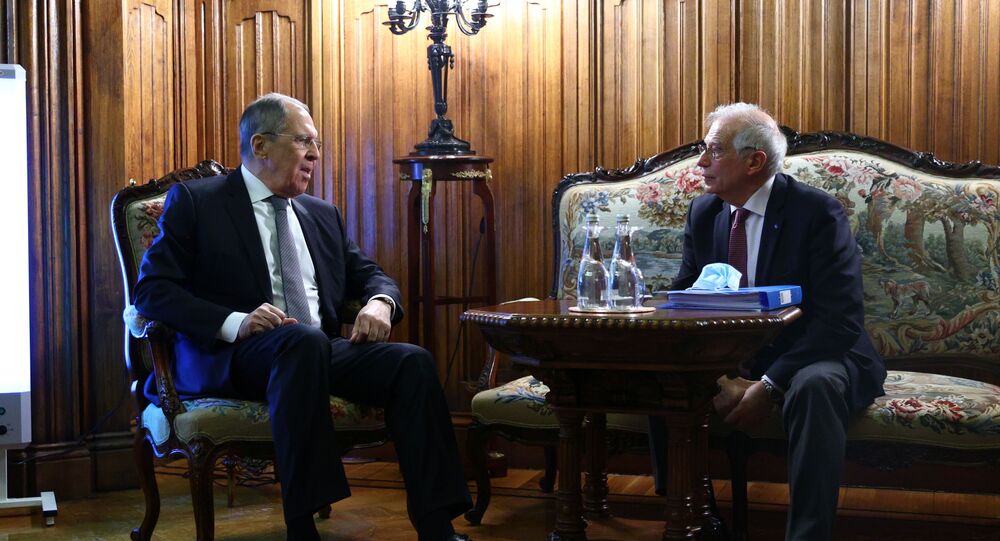 Moscow Surprised by Borrell’s Comments on Visit, Says They Contradict His Earlier Statements

Borrell stated on Sunday that the meeting with Russian Foreign Minister Sergey Lavrov was a "very complicated" visit for him, claiming that Russia was "progressively disconnecting itself from Europe".

The Russian Foreign Ministry said on Sunday that it was surprised by EU foreign policy chief Josep Borrell's comments on his meeting Russian with top diplomat Lavrov, adding that they in fact contradict the statements Borrell had made in Moscow.

"Possibly, upon his arrival in Brussels, the EU foreign policy chief was told what kind of highlights he should make, but then this only proves who is actually behind EU policy," a Russian foreign ministry spokesperson told journalists when asked about Borrell’s comments on social media.

In his personal blog, Borrel wrote that "Russia is progressively disconnecting itself from Europe and looking at democratic values as an existential threat." However, when speaking in Moscow, the EU foreign policy chief said that although EU-Russian relations were far from satisfactory, diplomatic channels should remain open.

"We reviewed Borrell’s assessments of the visit [to Russia] with surprise, they contrast strongly with his statements given at a press conference in Moscow," a Russian foreign ministry representative told journalists commenting on the remarks.

According to the Russian foreign ministry, Borrell was given an opportunity to give his assessment of the talks in Russia during the Moscow press conference and he used that opportunity. "Nobody limited him either in time or format," the ministry representative said.

Borrell also wrote that he knew about Moscow's decision to expel three EU diplomats through social media and personally asked Russian Foreign Minister Sergey Lavrov to reverse this decision, but "to no avail."

Unauthorized rallies swept through Russian cities on January 23, January 31 and February 2 in support of opposition activist Navalny, who was detained upon arrival in Moscow from Germany, where he was treated for alleged poisoning. Russia on Friday expelled three European diplomats — from Germany, Poland and Sweden — for participating in the unauthorized rallies.

The Russian Foreign Ministry earlier advised foreign politicians commenting on the situation with Navalny to respect internal law and deal with its own domestic problems. Lavrov noted that his Western counterparts are visibly happy to churn out nearly identical statements.

The Russian presidential spokesman called organizers of demonstrations provocateurs, while President Vladimir Putin said that everyone had the right to freedom of opinion but "anything that goes beyond the law is not just counterproductive but dangerous."