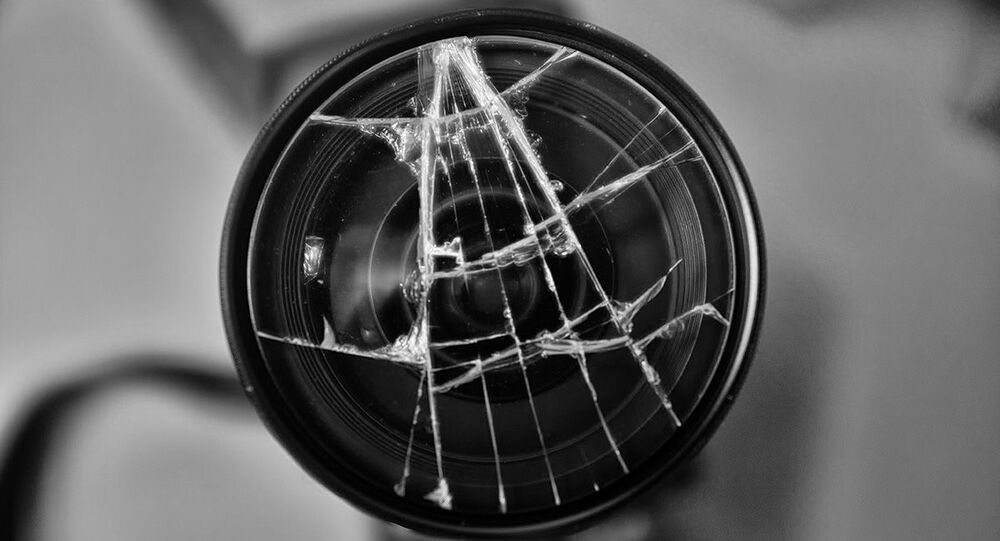 The disputed region has been embroiled in violence over the past several days after Armenia and Azerbaijan accused each other of military provocations in the area.

Two journalists with the French Le Monde newspaper have been injured in an Azerbaijani attack while covering the situation in Nagorno-Karabakh in the town of Martuni, Armenian governmental account Armenian Unified Infocenter said in a tweet Thursday. The wounded journalists have been taken to a hospital. One of them is in critical condition and is being operated on in Stepanakert. Reuters, meanwhile, has cited an anonymous source as saying that both journalists, born in 1989 and 1991, were in critical condition. French President Emmanuel Macron has offered to have the injured journalists transported to France by plane, which, he said, was already prepared to bring them back.

The aftermath of the attack on the journalists' car has been caught on video - the correspondents' silver Nissan had its windows shattered, while its seats were stained with blood.

According to Armenian Unified Infocenter, journalists from other media outlets were also injured in the Azerbaijani attack. Soon after the report, the broadcaster Armenia said that their cameraman Aram Grigoryan was wounded in the clashes. Hours later, Armenia's 24news outlet revealed that its reporter was also injured in Martuni and is now in hospital.

The Artsakh Information Headquarters reported that a car transporting Agence France-Presse journalists also came under attack in the Matuni skirmishes.

​In the meantime, Russia's TV Rain Editor-in-Chief Tikhon Dzyadko wrote on Telegram that the broadcaster's correspondent, Deputy Editor-in-Chief Dmitry Yelovsky, came under attack amid the clashes in and was taken to a bomb shelter.

According to TV Rain's head, Yelovsky was not injured in the attack.​ No other TV Rain reporters are currently present in the conflict-torn region, Dzyadko added.

Intense clashes have rocked the Nagorno-Karabakh region amid mutual accusations by Armenia and Azerbaijan of ceasefire violations and exchanges of fire. The disputed area has been a sensitive issue for the two republics for several decades since the predominantly ethnically Armenian region broke away from Azerbaijan.

At present, the republic is governed de facto independently, but is not recognised by any UN member.