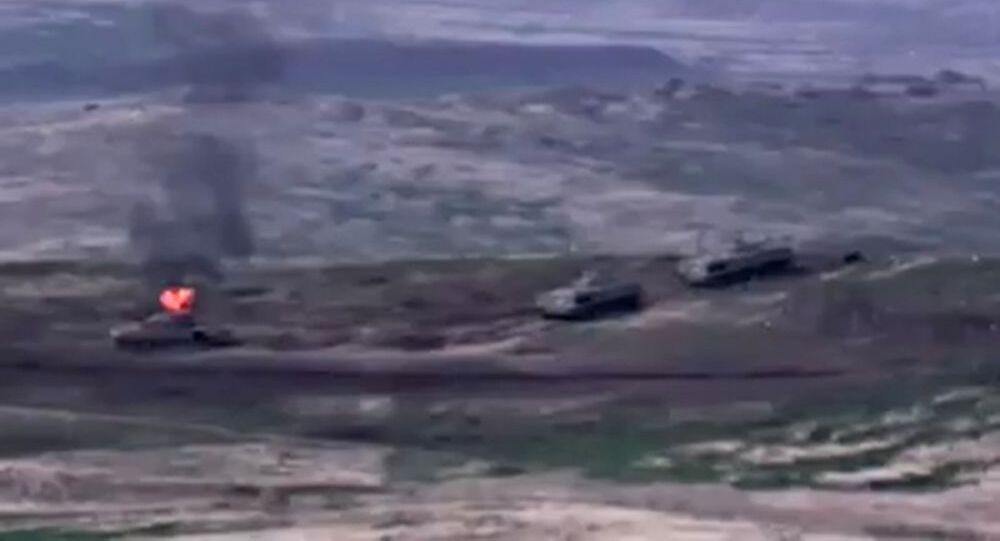 Video of 'Azerbaijani Tanks' Annihilation' Shared Online by Armenian Side

Although the tanks can be seen hit, plumes of smoke rising from them because of the impact make it difficult to gauge the damage inflicted.

Armenia's Ministry of Defense has released a video of Azerbaijani armoured units being hammered by heavy-weapons fire, as clashes between Armenian and Azerbaijani forces broke out along the line of contact in the Nagorno-Karabakh in the early hours of Sunday morning.

The brief footage, posted on YouTube and titled “The annihalation (sic) of Azerbaijani tanks and manpower” shows at least two main battle tanks being hit, though plumes of smoke mask the extent of the damage inflicted.

Clashes in the Nagorno-Karabakh region broke out early on 27 September, with both the Armenian and the Azerbaijani sides blaming each other for initiating the hostilities.

An ombudsman for the unrecognised breakaway Republic of Artsakh (Nagorno-Karabakh Republic) has reportedly announced that a woman and a child have been killed during shelling by Azerbaijani forces.

Martial law and mobilisation have also been declared in both Armenia and Nagorno-Karabakh.

Azerbaijan and Armenia have been vying for control of the Nagorno-Karabakh region since the early 1990s, with the latest armed clashes in the region breaking out in July, with both sides reporting casualties.