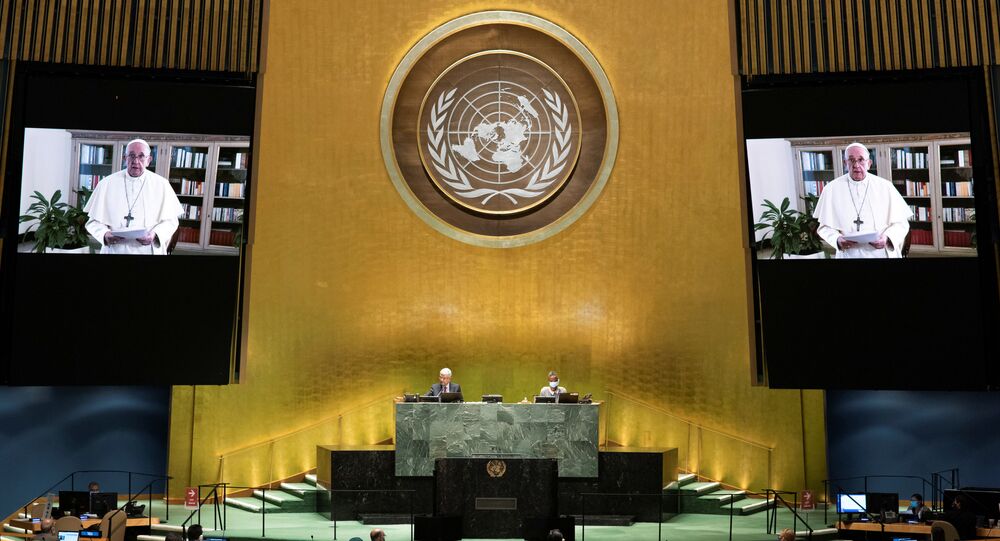 UNITED NATIONS (Sputnik) - Pope Francis said in his address to the UN General Assembly on Friday that he expects the review conference of the parties to the Nuclear Non-Proliferation Treaty (NPT) to result in specific measures to end the arms race as soon as possible.

"The Holy See hopes that the forthcoming review conference for the NPT treaty will lead to concrete measures being taken in line with our common intention to see the end of the arms race, the nuclear arms race as soon as possible," Pope Francis said. "We do hope that effective measures will be taken towards achieving nuclear disarmament."

Pope Francis pointed out that nuclear deterrence promotes the spirit of fear and mistrust among nations and ends up in poisoning relations and hindering dialogue.

"That is why it is so important that we support the main international legal instruments for nuclear disarmament, nonproliferation and prohibition," he said.

The 2020 review conference was planned to take place at the United Nations headquarters in New York in April. However, in light of the novel coronavirus restrictions, the parties decided to postpone the conference to a later date, but no later than April 2021.

Pope Francis said in his speech to the UN General Assembly on Friday that it is crucial to ease international sanctions against countries struggling to provide the necessary support to their people.

"I also reiterate the importance of reducing international sanctions, as they make it harder for states to provide appropriate support to their peoples," Pope Francis said.

The Pope paid particular attention to the challenges brought about by the erosion of multilateralism and shrinking solidarity among nations, including during humanitarian crises that have become "the status quo."

However, the Pope said the ongoing novel coronavirus crisis represents an opportunity for the United Nations to bring about a more "fraternal and compassionate" world.

At the onset of the novel coronavirus pandemic in March, UN Secretary-General Antonio Guterres had also called for rolling back of international sanctions.