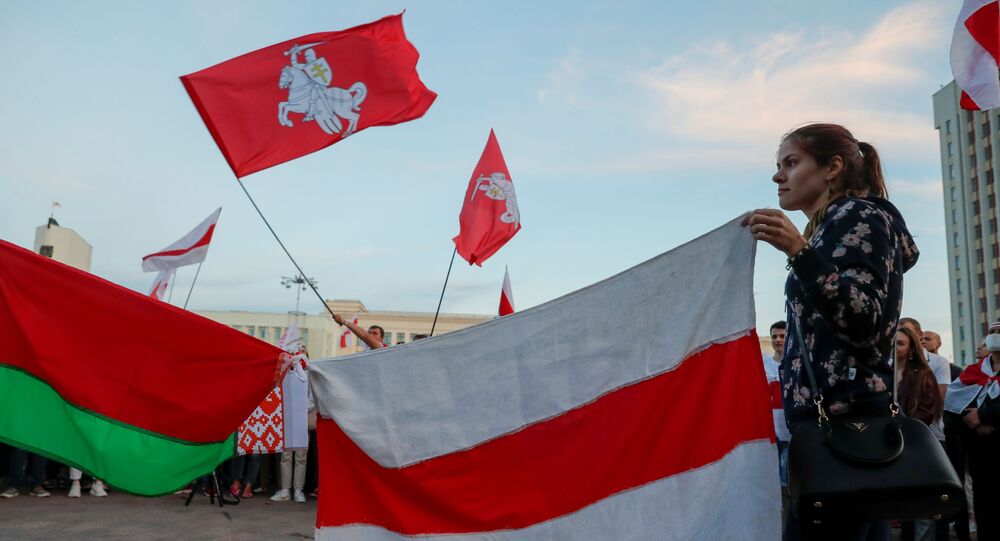 Sergei Lavrov: The West Seeks to Remake Belarus in Its Own Design

Anti-government protests have continued in Belarus for more than two weeks now, with demonstrators taking to the streets to express their anger over the results of the August 9 presidential election in the republic which they believe was rigged in favour of Lukashenko.

The West has been seeking to remake Belarus in its own design, Russian Foreign Minister Sergei Lavrov said at a youth forum in the Moscow region on Sunday.

"The inability of our Western partners to engage in a dialogue is a rather serious fact that we have to take into account, and not only we. And now, when they are trying to redraw Belarus according to their own design and offer their mediation … Of course, we will not be against any decision that the Belarusian leadership will make regarding dialogue with its population," Lavrov said.

The foreign minister also reminded the audience about the consequences of Western mediation during the crisis in Ukraine in 2014.

"When the West says that only mediation with the participation of Western countries will be effective, everyone remembers how it was in Ukraine, where Western mediation turned into a complete inability of our partners to negotiate," Lavrov said.

According to Lavrov, Russia welcomes Lukashenko’s proposal for a dialogue with the opposition on constitutional reform.

"President Lukashenko has repeatedly said during his recent meetings with workers that he supported dialogue, including the most important proposal - a dialogue on constitutional reform. This is a very promising path" Lavrov said.

The people of Belarus will find a way out of the crisis on their own, they don't need any mediators, the minister said.

According to Mr Lavrov, external forces have been seeking to provoke bloodshed in Belarus. There are Belarusian activists who have been inciting unrest from abroad, Lavrov said. In trying to shift power from the president, the opposition in Belarus are attempting to emulate the Venezuelan scenario, Russia's top diplomat added. At the same time, the Russian minister said that the situation in the neighbouring country was stabilising.

The republic has been engulfed in mass anti-government protests since the late evening of 9 August when the early results of the presidential election were announced, showing incumbent President Alexander Lukashenko securing a landslide victory and a sixth term in office with 80% of the votes, while his main rival, Svetlana Tikhanovskaya, got only around 10%, according to the election committee.

Opposition supporters insist that the election was rigged, a claim that Lukashenko rejects. Mr Lukahsneko has accused the West of trying to undermine stability in Belarus and said he was concerned about what he called a NATO military build-up close to his country's borders.