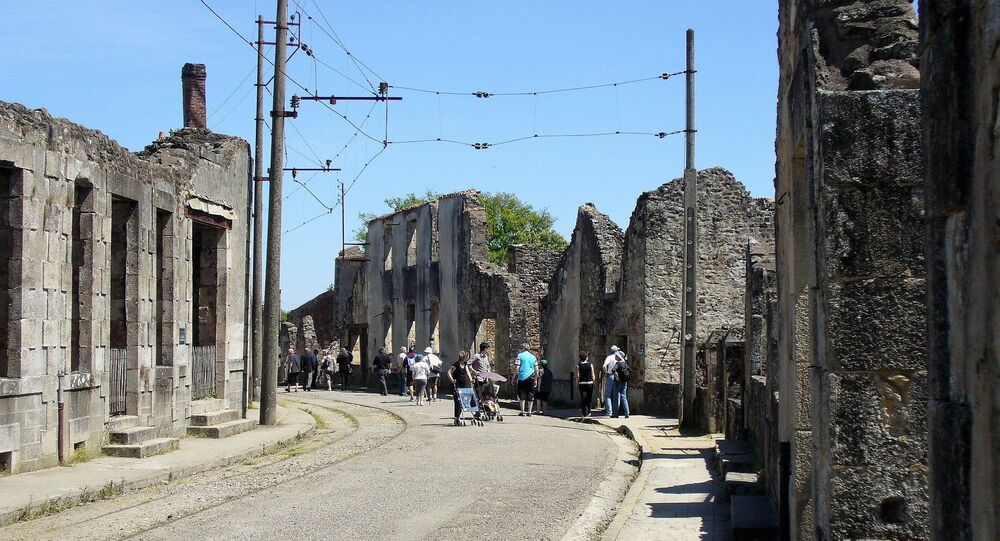 Sites and buildings destroyed by Nazis or where they committed atrocities were rebuilt or marked with monuments, but Oradour-sur-Glane village has a different story. Authorities deliberately preserved charred ruins where 642 people, including 247 children, were shot and burned so that their descendants remember the barbaric crimes of the Nazis.

A French memorial dedicated to victims of the Nazis' worst massacre on French soil was defaced with Holocaust-denying graffiti. The vandals crossed out the word "martyr" and replaced it with "liar" and also wrote: "When will the truth be told? Reynouard is right"

The last sentence refers to French historical revisionist and Holocaust denier Vincent Reynouard, who was jailed for a year after distributing pamphlets questioning the massacre in Oradour-sur-Glane village and received another two-year sentence for Holocaust denial.

​The desecration of the memorial caused immense shock and anger among local residents and the French authorities.

"We think of our survivor [of the massacre], Robert Hébras, we think of all the families of the victims. We must fight relentlessly against revisionism and negationism. We must fight together against this scourge", declared the mayor of the village.

French President Emmanuel Macron has promised that "everything will be done" to find the people who vandalized the Center for Remembrance.

In 1944, troops from an SS division killed 642 residents of Oradour-sur-Glane, herding them into barns and a local church and setting the structures on fire. Other residents were shot. Robert Hébras, who was mentioned earlier, was among the handful of survivors. He managed to stay alive by hiding under a pile of dead bodies.

Unlike other massacre sites, which were rebuilt, razed or marked with monuments, the French authorities decided to preserve the ruins, with President Charles de Gaulle ordering that they should bear witness to the barbaric crimes of the Nazis for the descendants to know and remember. The village is annually visited by 300,000 tourists and French residents.

It is still unknown why the Nazis decided to slaughter the residents, as Oradour-sur-Glane was not a centre of resistance fighters. According to one version, the massacre was an act of retaliation for the kidnapping of a German soldier by the French resistance.