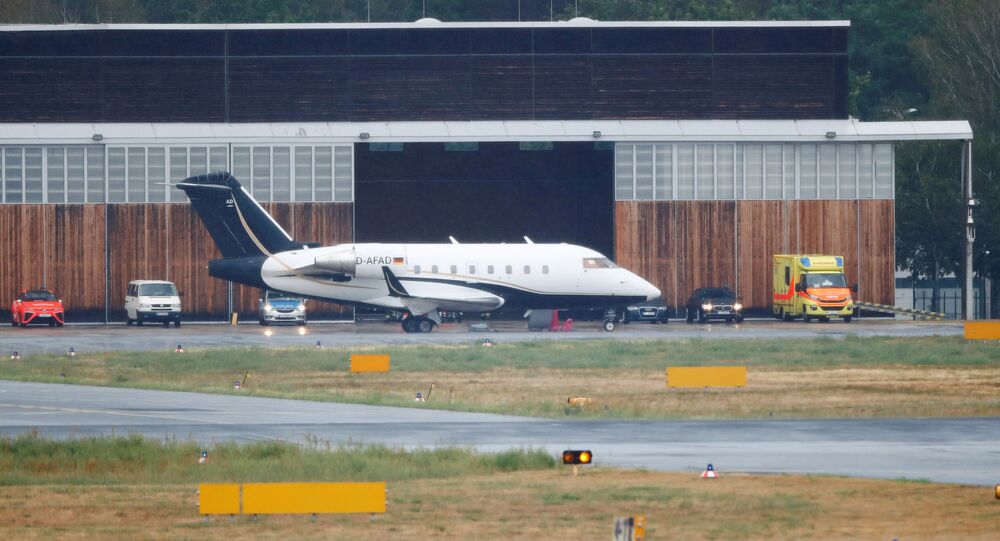 BERLIN (Sputnik) - Russian opposition figure Alexey Navalny coped with the special flight from the Russian city of Omsk to Berlin well, Jaka Bizilj, the founder of the Berlin-based Cinema for Peace Foundation, said on Saturday, adding that his condition did not worsen but remains critical.

A plane with Navalny on board arrived in Berlin earlier in the day.

"The main thing at the moment is that he has endured the flight well and is in a stable condition, he is in a very critical condition, but it has not worsened due to the flight. That is what's most important. At the moment, a medical consultation is underway to determine what measures need to be taken," Bizilj told reporters.

Meanwhile, Russia's regional Health Ministry said that doctors from the Omsk hospital were ready to provide all the information necessary for Navalny's treatment to their German colleagues in the Charite hospital.

In addition, the ministry said that oxybutyrates, barbiturates, strychnine or other poisons had not been detected, according to the medical tests, while alcohol and caffeine were found in the urine.

Navalny was on a flight from the Siberian city of Tomsk to Moscow on Thursday when he became gravely ill. The plane made an emergency landing in Omsk, where Navalny was hospitalized and fell into a coma. He has since been put on a ventilator. Navalny's associates believe that the politician was poisoned, most likely after drinking a cup of tea at the airport in Tomsk. However, doctors consider a metabolic dysfunction and a plunge in sugar level to be the main diagnosis.

On Friday, Omsk doctors greenlighted Navalny's transportation for treatment to Germany. The Berlin-based Cinema for Peace Foundation sent a plane with a team of medical professionals to Omsk in an effort to move Navalny to the Berlin hospital.

Jaka Bizilj, the founder of Cinema for Peace, told Bild newspaper that Navalny's condition was stable upon arrival in Berlin earlier on Saturday. According to the media outlet, the jet that transferred Navalny to Germany is currently at the government terminal of Berlin airport.

The foundation said in a statement obtained by Sputnik that Navalny's family would make a statement in the coming days after receiving additional information about the health of the Russian opposition figure.