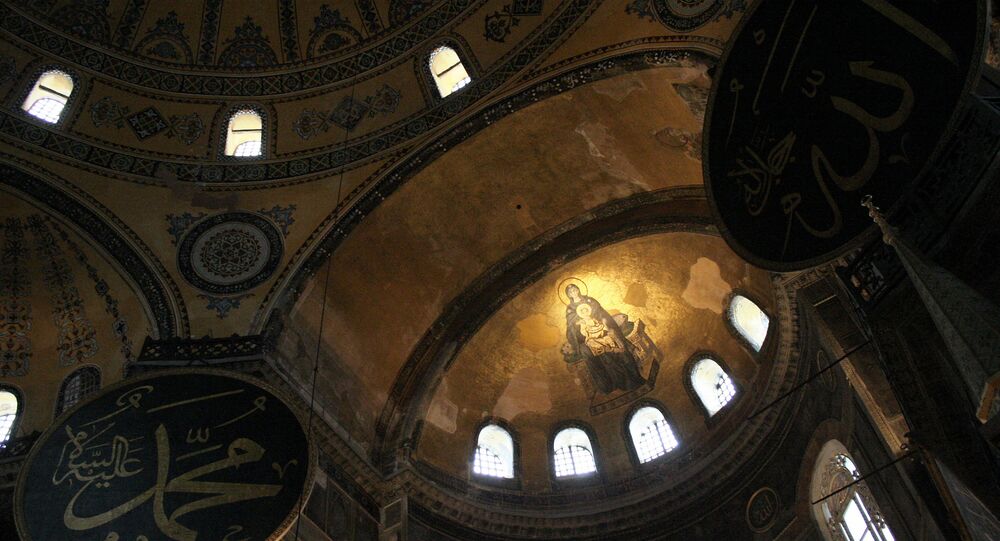 Hagia Sophia: Where Will All the Icons and Holy Relics Be Taken?

Earlier this week, Turkey's Ministry of Culture and Directorate of Religious Affairs signed a protocol confirming that Hagia Sophia in Istanbul, which was recently converted into a mosque, will be preserved as a global heritage site following its change of status.

Portable icons and Holy relics from Hagia Sophia will be transported to the Land Registry building located in Sultanahmet Square where they will be exhibited, Turkish Culture and Tourism Minister Mehmet Nuri Ersoy said, as quoted by Greek City Times.

In all, 1359 objects are expected to be on display there.

According to the minister, Hagia Sophia will be open for locals and tourists free of charge.

This comes a week after the world-famous museum, which was originally founded as a cathedral, was turned into a mosque. It is expected to open for Muslim prayers on 24 July.

© AFP 2020 / OZAN KOSE
A picture taken on July 11, 2020 shows police fences set up around Hagia Sophia in Istanbul, a day after a top Turkish court revoked the sixth-century Hagia Sophia's status as a museum, clearing the way for it to be turned back into a mosque. - President Recep Tayyip Erdogan on July 11 rejected worldwide condemnation over Turkey's decision to convert the Byzantine-era monument Hagia Sophia back into a mosque, saying it represented his country's will to use its "sovereign rights".

Built by Byzantine Emperor Justinian as an Orthodox Christian cathedral in the 6th century, Hagia Sophia remained the world's largest Christian church for almost a thousand years before Constantinople was captured by the Ottoman Empire and renamed Istanbul in the 15th century.

In 1453, Hagia Sophia was converted into a mosque; in 1934 it became a museum, and in 1985 it was placed on the UNESCO World Heritage Sites list.