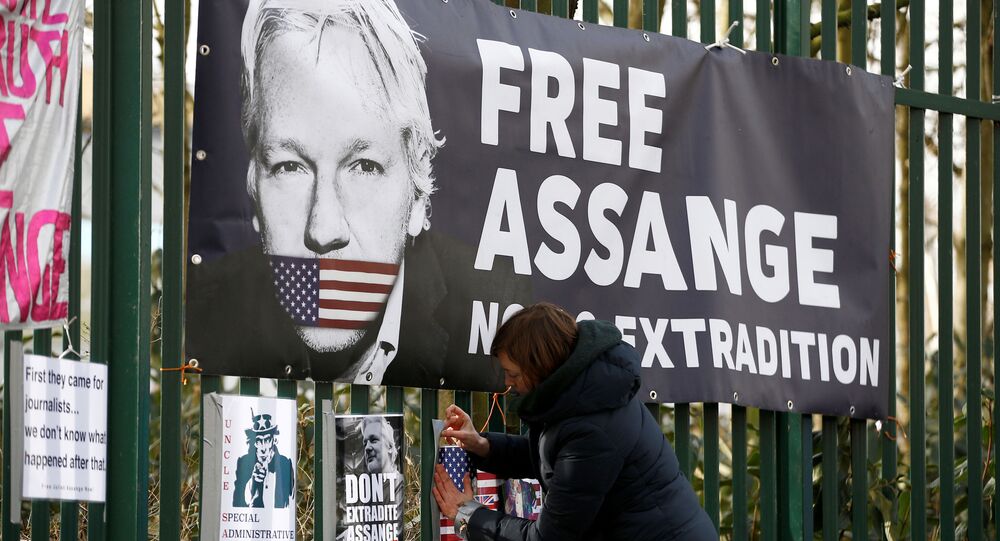 LONDON (Sputnik) - The lawyers of WikiLeaks founder Julian Assange continue to request his release on bail at a London court due to the high risks of contracting the coronavirus disease at the prison in which he is being held.

"Campaigners continue to insist that as a remand prisoner held in jail for no crime Assange should be immediately released on bail to avoid the risk of contracting COVID-19," the "Don't Extradite Assange" campaign said in a statement on Thursday.

Assange is expected to attend a Monday hearing via video link, while the hearings in the case of his extradition to the United States have been put off until 7 September.

"By doctor’s advice, Assange did not participate in the last two procedural hearings, as moving through the prison to use the communal video room would put him at even greater risk of contracting the virus. Assange has an underlying lung condition that makes him especially vulnerable to COVID-19," the statement noted.

The number of coronavirus cases among the prison staff has increased by 310 to over 870 within a week, according to the statement.

"Edward Fitzgerald QC [one of Assange's lawyers] told the court on 4 May that the defence team had had no more than two phone calls with Assange in the last month. The hearing on Monday is a routine hearing to renew Assange’s detention until the extradition hearing restarts on 7th September 2020," the campaigners said.

Assange is currently in London’s high-security Belmarsh prison awaiting a decision on whether he will be extradited to the United States. If extradited, the whistleblower will face up to 175 years in prison.

The former Australian editor, who gained global prominence after his whistleblower website published a video in 2010 of US military helicopters targeting civilians during the war in Iraq, fled to the Ecuadorean Embassy in 2012 after Sweden made moves to extradite him on sexual assault charges, which the 48-year-old believes were trumped up to deliver him to the United States.