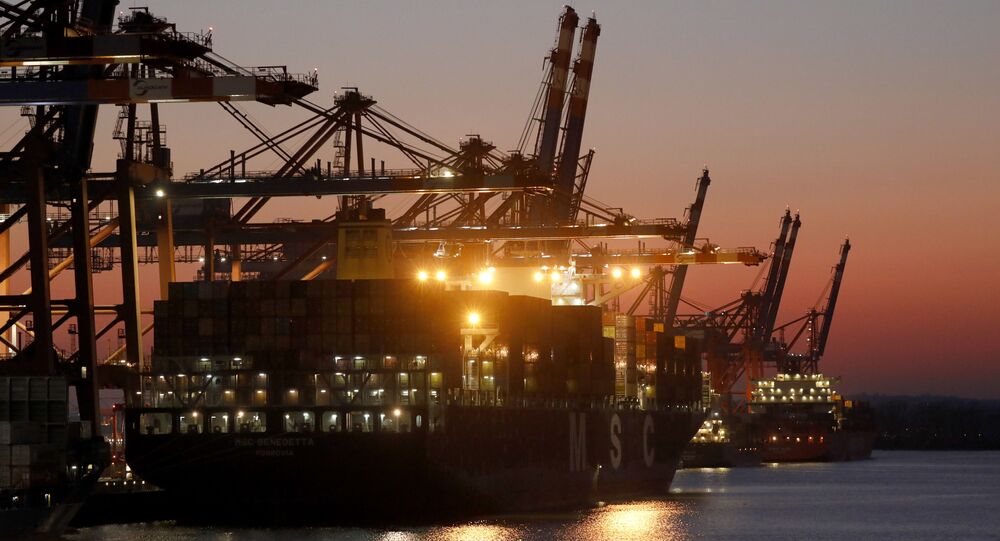 In January it was estimated the annual market in the shipping of dry bulk - steel, coal, ore, lumber, sand, animal feed, sugar, coffee, tea, cocoa beans and grain, including bagged rice - would grow to US$402 billion by 2023. The coronavirus outbreak went global in March and the shipping industry fears it might seize up because of quarantine laws.

The shipping industry has called on governments around the world to treat the world’s 1.6 million seafarers as "key workers" and exempt them from quarantine restrictions or face the global supply chains seizing up.

The air cargo industry has so far been largely unaffected by the coronavirus outbreak with fresh fruit and vegetables being flown around the world to their destinations and the shipping of freight has also escaped unscathed.

A shipping industry leader explains how to keep supply chains moving amid a pandemic https://t.co/Kr4S4vEYli pic.twitter.com/FNCP7Kdo03

​But sources in the shipping industry say a storm may be looming on the horizon.

Many ship crews have extended their contracts to keep the industry going but hundreds of thousands of seamen from India, Indonesia, Russia and the Philippines are trying to get home to be with their families.

Guy Platten, Secretary General of the International Chamber of Shipping (ICS), said: "There are currently 1.2 million seafarers out at sea at any point. The safety and welfare of these seafarers are our top priority. Seafarers are by their nature, extremely resilient. It's not unusual for a normal term at sea to last anywhere up to six months."

But he said: "The current crisis has created situations in which crew change is almost impossible and that has resulted in the terms of many having to be extended. Sacrifices such as this sometimes go unnoticed in the wider conversation, but these seafarers are front-line workers and their contribution should be recognised. Seafarers are the unsung heroes of global trade."

​Earlier this week the Secretary General of the International Maritime Organization (IMO), Kitack Lim, said it was "crucially important that the flow of commerce by sea should not be unnecessarily disrupted."

when the whole world is on the lock-down , ONLY SHIPS ARE OPERATING 100% ,to keep supply chain open and to supply food/fuel/gas to the world , while sailors themselves are locked-down on ships with no crew changes & no shore leave around the world( unnoticed FRONT LINE TIGERS ) pic.twitter.com/ccLaGepwxG

​He said seafarers were "on the front line of this global calamity.”

Mr Lim urged governments to “grant professional seafarers and marine personnel with any necessary and appropriate exemptions from national travel or movement restrictions in order to facilitate their joining or leaving ships.”

Usually around 100,000 seafarers every month are involved in crew changes - one crew ends their contracts after arriving at their destination and unloading a ship and then takes time off while replacement crews take over and sail the ship to a new port.

.@mikesellersPIP has a message for everyone - goods are continuing to flow through Portsmouth and all other ports around the country, keeping the UK stocked with vital goods during this unprecedented time.#WereAllInThisTogether@britishports @ukshipping @UKMajorPorts pic.twitter.com/kYkwWvOMmF

​But the quarantine laws imposed by Italy, Britain, the United States, France, Japan and numerous other countries has made crew changes very difficult.

Mr Platten said: "While we are confident that seafarers across the world will continue to work within the boundaries of what is possible, it is important that we ensure that we can return these men and women home. Furthermore, it’s vital for the continuity of trade that crew reliefs can take their places."

On 19 March a bulk carrier, the Thalassini, arrived in Royal Portbury Dock, near Bristol in the west of England to offload a cargo from Ravenna in coronavirus-hit Italy.

It is not known if the crew of the ship was allowed to disembark in Bristol but on 28 March a crane loading the ship with grain caught fire.

Coronavirus has brought back the long long tweet genre of #BoatWatch:

​The ship, with its load of English barley, is due in Port Said, Egypt on 10 April but it is not clear if a crew change took place in Bristol.

It is common for crews to change depending on which company has chartered a vessel but sources in the shipping industry say crew changes are becoming almost impossible because of the quarantine laws and the lack of international flights.

Mr Platten said: "Global shipping operates on the assumption that we will be able to crew change 100,000 seafarers each and every month. National lock downs, travel bans and port restrictions are making this crew change more difficult. In the absence of normal travel arrangements, safe and sustainable solutions are needed to transport these 100,000 key workers around the world."

On 23 March the British government, in the form of transport minister Kelly Tolhurst, wrote to the International Maritime Organisation (IMO) and assured them that "in these extraordinary times” they were "committed to the welfare of seafarers of all nationalities."

In response to client requests, Telford Offshore, in consultancy with International SOS (ISOS), has developed a plan for using its multi-purpose offshore accommodation vessels as an offshore isolation facility for safer crew changes. #MaritimeNews pic.twitter.com/f07TTbnqWB

​Ms Tolhurst wrote: "I want to assure all of you that the UK will continue to recognise our commitments under the international conventions regarding the transit and transfer of seafarers and their right to access shore leave."

While passenger cruiseliners are not going anywhere, cargo ships are still circulating around the world but if crew changes cannot be made the global supply chain which keeps the world’s economies could grind to a screeching halt.

Last week the managing director of Peter Gilding, a British fruit importer and distributor, said the wholesale price of fruit had gone up because international transportation costs had risen.

A Department of Transport spokeswoman said: "The government is committed to honouring its obligations towards seafarers under international maritime law as set out by Maritime Minister Kelly Tolhurst in her letter...We will continue to permit access to shore leave and will aid the transit and transfer of crew through the UK, with the welfare and health of the crew and those working at ports being the main priority."

She said: "The shipowner remains responsible for the welfare of the seafarer at all times until repatriated and the UK Government is working closely with its international partners to facilitate the repatriation of seafarers currently docked at UK ports as soon and as safely as possible, in line with its international legal obligations."

Ms Tollhurst is said to be chairing weekly calls with industry leaders "directly engaging stakeholders to discuss the challenges presented by COVID19 outbreak."