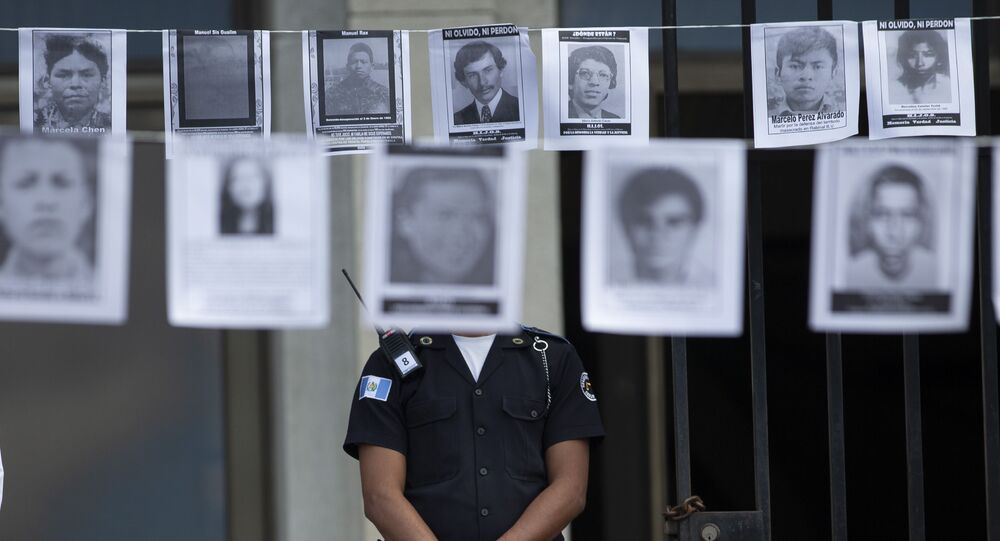 During the Cold War the CIA was obsessed with keeping communism out of Latin America. In the 1970s and 1980s the agency backed right-wing regimes in Guatemala which carried out genocidal attacks in indigenous groups which supported left-wing rebels.

Three retired officers in the Guatemalan army are awaiting trial accused of carrying out genocide against the Maya Ixil people almost 40 years ago.

General Benedicto Lucas García, General Manuel Callejas y Callejas and Colonel César Octavio Noguera Argueta were high up in the CIA-backed Guatemalan regime when it clamped down on leftist rebels and civilian sympathisers in the late 1970s and early 1980s.

If the CIA had been abolished in 1974, how many 1000s of innocent civilians from El Salvador, Chad, Guatemala, Honduras, and Nicaragua would still be alive today?

And how many Iraqis, too? It was the CIA's George Tenet who told Bush the Iraqi WMD intel was a "slam dunk". https://t.co/YvHXahFe9D

Washington’s policy in Central America was defined by the Cold War, the growing influence of Cuba in the region and a neurotic fear that communism would take over and threaten the US’s southern border.

In 1979 the Nicaraguan dictator Anastasio Somoza was ousted by the Sandinistas and next door, in El Salvador, the Farabundo Marti Liberation Front was fighting to unseat a military junta which deployed death squads against suspected guerrillas and their supporters.

Guatemala occupied a vital strategic position straddling the Central American isthmus just south of Mexico and President Jimmy Carter and his successor Ronald Reagan were determined not to let it fall into communist hands.

So when several leftist rebel armies, most notably the Guerrilla Army of the Poor (EGP), began an insurgency the CIA was quick to support the government of President Fernando Romeo Lucas Garcia, a former army general.

The Guatemalan government was also supported by Argentina - then run by a military junta committing savage human rights abuses against leftists - and got logistical support from Israel, Taiwan and apartheid-era South Africa.

Lucas Garcia’s army carried out brutal massacres against indigenous groups in the Maya highlands, who were largely supportive of the EGP and other rebel armies.

Over the next four years around 200,000 people were killed and the violence did not improve when Lucas Garcia was ousted in a military coup by General Efrain Rios Montt.

The guerrillas gradually lost ground during the 1980s and eventually the Guatemalan National Revolutionary Unity (URNG), an umbrella group representing the rebels, signed a peace agreement in 1996 in which they were reintegrated into democratic politics.

But despite the peace agreement there was still a long wait for justice for the victims of the government atrocities.

The Center for Justice and Accountability said: “Due to the extent to which Guatemala’s judicial, police, and military institutions have historically been infiltrated by organised crime…the country is often ranked as one of the most corrupt and impunity-riddled states in the world.”

In many cases judges wore masks to hide their identities when presiding over cases in which the defendants were powerful individuals.

In 2009, under international pressure, the Guatemalan government set up the Courts for High Risk Crimes, which introduced higher security for judges and lawyers involved in the process.

In 2013 Rios Montt, by then aged 86, was finally convicted by the Courts for High Risk Crimes of his involvement in the Maya Ixil genocide, but he immediately appealed and died five years later during his retrial.

Benedicto Lucas García - the former chief of the General Staff and brother of former President Lucas Garcia - and Callejas, a former chief of military intelligence, were jailed for 58 years for detaining, torturing and raping a teenager, Emma Molina Theissen and killing her 14-year-old brother Marco.

The pair, along with Noguera Argueta, a former chief of military operations, are now facing trial for their role in the Maya Ixil genocide.

Earlier this month Judge Miguel Ángel Gálvez suspended a pre-trial hearing after defence lawyers claimed the genocide charges should be heard by an ordinary court, rather than the Courts for High Risk Crimes.

It remains unclear whether the Maya Ixil people will ever get justice.