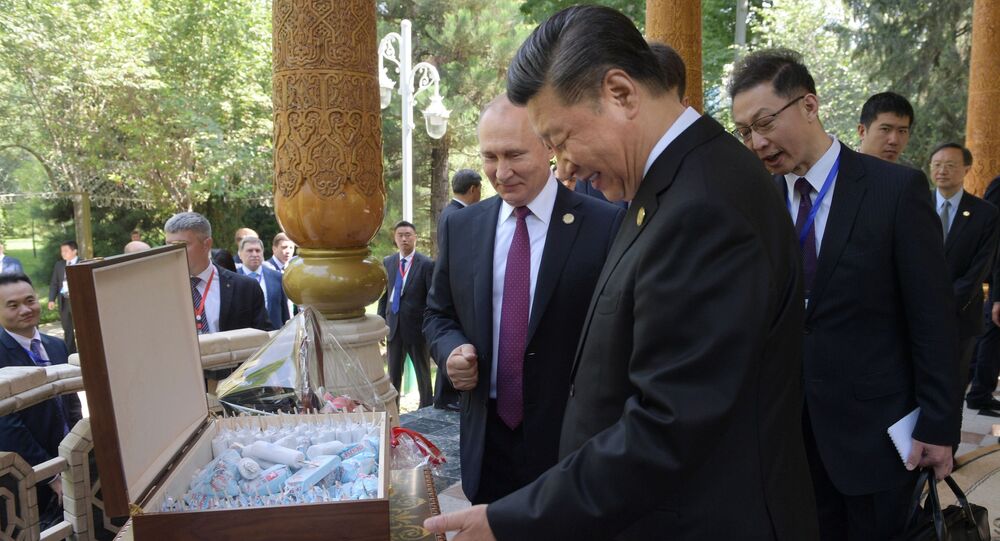 BEIJING (Sputnik) – Russian President Vladimir Putin and his Chinese counterpart Xi Jinping will hold two meetings in Russia and one in China this year and are also expected to hold talks on the sidelines of various international events, Russian Ambassador to China Andrey Denisov says.

"There is hope that by springtime the situation with the coronavirus will sort itself out and our main events that begin starting from May with the expected, planned visit of Chinese leader Xi Jinping to Russia to participate in events commemorating the 75th anniversary of the Soviet Union’s victory in the Great Patriotic War and further meetings, all this will go in accordance with the schedule", Denisov told Russian media on Monday.

He added that apart from the May visit to Russia, Xi Jinping also plans to come to St. Petersburg in July, while the Russian president is expected to visit China in the second half of the year.

"We have a lot of meetings and a lot of trips but every year there is the main event – the state or official visit. Last year Xi Jinping came on a visit to our country so this year it’s our turn", Denisov said.

He added that the number of meetings on the sidelines of various international events this year "will be no less than in the past years".

According to the Ambassador, China does not only support the proposal of Russian President Vladimir Putin to hold a meeting of UN Security Council (UNSC) permanent member state leaders but is ready to help with preparations.

"Our Chinese friends did not stop at simply expressing approval, they told us that they were ready to participate in the preparation, if other countries express their consent, to offer their proposals and express wishes, and I’m sure that they will be constructive … if, indeed, we succeed in convening such a meeting", Denisov said.

He added that Russia is yet to hear a response from Washington regarding Putin’s proposal.

Russian Ambassador to the United States Anatoly Antonov said on Sunday that the US side was considering the initiative of the Russian president.

Kremlin spokesman Dmitry Peskov told reporters in January that messages detailing Putin’s proposal to hold a summit of leaders of the UN Security Council’s permanent member states had been sent to recipients.

The Russian President made the proposal at the Fifth World Holocaust Forum, suggesting that "a meeting of the heads of state of the permanent members of the UN Security Council - Russia, China, the United States, France and the UK be held".

According to Peskov, China and France have already expressed support for the proposal.