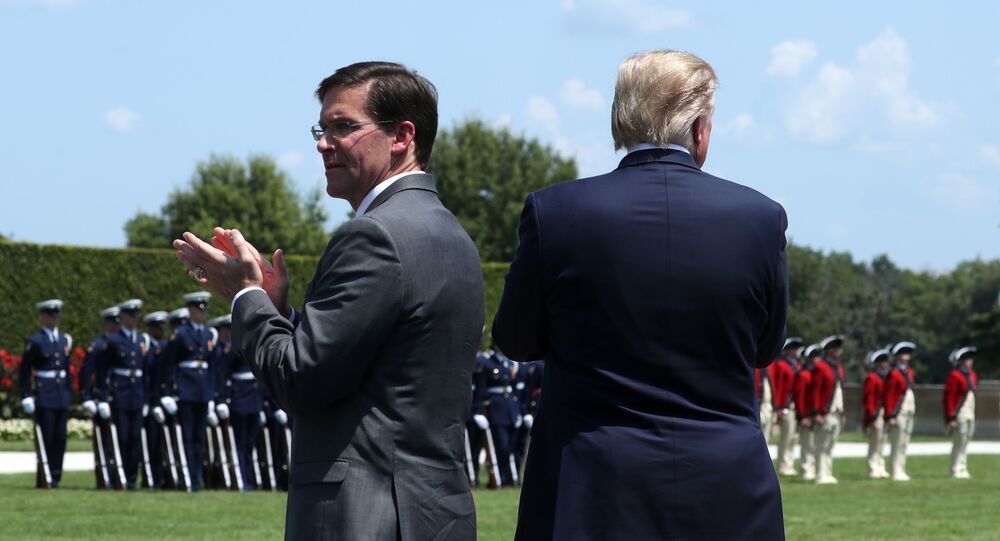 Esper Says US Has Legal Authority to Attack Iranian Soil

The January 3 assassination of Iranian Quds Force commander Qasem Soleimani saw Iran-US tensions soar to new heights, prompting an Iranian missile attack on US forces in Iraq and briefly sparking fears of a full-blown military conflict in the region.

The United States has the legal and constitutional authority to continue attacking ‘Iranian proxies’, in Iraq or even on Iran’s home soil, in response to attacks against US troops, Defence Secretary Mark Esper has said.

“We hold Iran responsible for its proxies, and we will retain the right to exercise self-defence and take action where legally available and appropriate to hold those proxies accountable for their actions,” the Pentagon chief said, speaking to NPR.

According to Esper, President Trump is entitled to attack Iran under Article 2 of the US Constitution, which gives the president the power to unilaterally engage in military actions in the event of an ‘attack upon the United States, its territories or possessions, or its armed forces.” The president’s rights are also backed up by the Authorization for Use of Millitary Force (AUMF), the legal measure passed by Congress in 2001 following the September 11 terrorist attacks, Esper suggested. The latter document has been renewed annually for nearly two decades, and used to justify US wars and military deployments around the globe, from Afghanistan and Iraq to the Philippines, Georgia, Yemen, Djibouti, Kenya, Ethiopia, Somalia and Eritrea.

Esper also again defended the Trump administration’s decision to target General Soleimani, saying the Iranian commander became a “compelling target to take out” because “there was complete agreement based on what he had done and what he was planning to do.” Soleimani, Esper claimed, had “the blood of hundreds of American soldiers and Marines on his hands.”

The latter assertion, including the claim that Iran provided Iraqi militias with arms to attack the US after the 2003 invasion, remains questionable. However, there is substantive and documented evidence to suggest that Soleimani actually indirectly assisted US efforts against Osama bin Laden and al-Qaeda* in Afghanistan and by targeting Wahhabi terrorists in the campaigns against Daesh (ISIS)* in Iraq and Syria.

Senior officials at the White House, the Pentagon and the State Department have had a difficult two weeks justifying the US decision to assassinate Soleimani, with the rationale shifting from claims that he posed an “imminent” threat to US interests, to President Trump’s comments Monday that it didn’t matter whether the threat was imminent or not because of the general’s “horrible past!” In recent days, anonymous officials speaking to US media alleged that the US actually began planning to kill Soleimani as far back as July 2018, with the periods of June 2019 and September 2019 also mentioned.

Soleimani, 62, was killed on January 3 when the convoy he and a senior Baghdad-allied Shia militia leader were in was hit by a US drone strike at Baghdad International Airport. The commander’s death led tensions between Iran and the US to spike to new highs, with Iranian leaders and commanders warning that they would “avenge” Soleimani’s death. On January 8, Iran’s Revolutionary Guards launched close to a dozen missiles at US bases in Iraq, with Tehran warning Baghdad about the strikes several hours ahead of time.

On Monday, Iranian Chief Justice Ebrahim Raisi announced that the Iranian government would seek to prosecute President Trump in an international court over Soleimani’s assassination.

Pompeo Refuses to Appear at House Hearing on Iran - Chairman

Boris Johnson on US-Iran Tensions: 'Let's Dial This Thing Down'