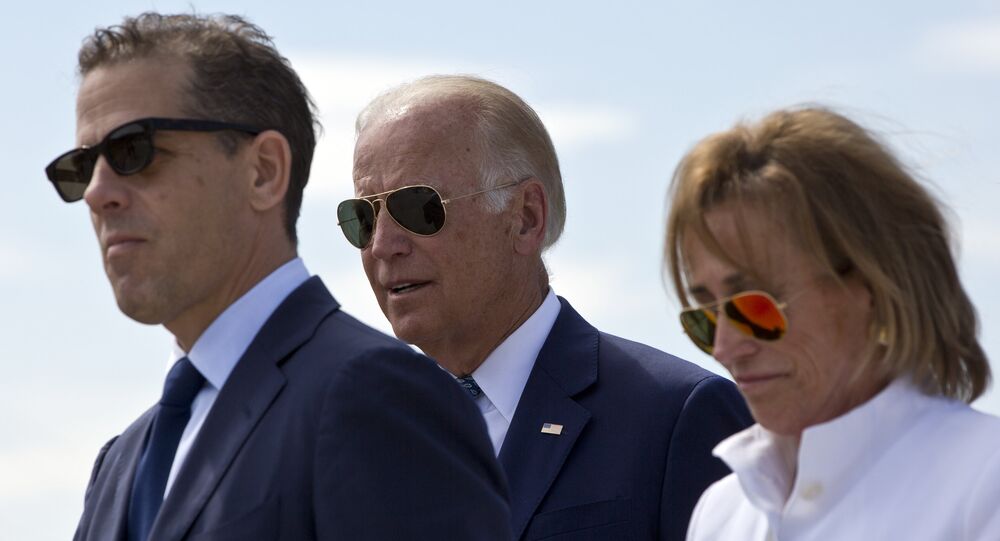 Earlier, President Trump accused the Democrats of seeking to stay clear of discussing former Vice President Joe Biden's alleged pressure on Kiev to fire a prosecutor investigating his son Hunter Biden, who has been accused of engaging in illegal activity while serving on the board of directors of an energy firm doing business in Ukraine.

US Secretary of State Mike Pompeo has said Democratic frontrunner Joe Biden may have "behaved inappropriately" in an effort to protect his son from an investigation into potential corrupt dealings in Ukraine.

Speaking to ABC's This Week on Sunday, Pompeo said Biden may have acted "in a way that was corrupt," and called for the vice president's actions to be further investigated.

On Friday, the Wall Street Journal reported, citing sources, that President Trump had called then newly-elected Ukrainian President Volodymyr Zelensky this summer to try to get him to investigate Biden's son Hunter and his ties to a Ukraine-based energy company being probed for corruption. Trump reportedly asked Zelensky about the subject over half a dozen times, following up earlier lobbying by Trump lawyer Rudy Giuliani on the issue earlier this year.

The Biden campaign released a statement Friday evening calling on Trump to release a transcript of his call with Ukraine's president, accusing the president himself of "corruption" and a "willingness to abuse his power."

WSJ emphasised in its reporting that, unlike Biden, who had reportedly threatened to withhold a major loan to Ukraine unless the prosecutor investigating his son was fired in 2016, there was no indication that Trump had offered Zelensky "any quid-pro-quo for his cooperation on any investigation."

On Sunday, Democratic House Intelligence Committee Chairman Adam Schiff told CNN that if the reports about Trump and his call with Zelensky were correct, impeachment may be the "only remedy."

"This would be, I think, the most profound violation of the presidential oath of office, certainly during this presidency, which says a lot, but perhaps just about any presidency. There is no privilege that covers corruption," Schiff said, reiterating the Democrats' calls to release the transcript of the Trump-Zelensky conversation. The lawmaker accused Trump of "browbeating a foreign leader," and trying to "get dirt on his political opponent."

Hunter Biden joined the board of directors of Burisma, a Cyprus-based energy company operating in the Ukrainian oil and gas sector, in 2014, shortly after the February 2014 coup d'etat in Kiev which ousted the Eastern European country's previous government. In 2016, then Vice-President Joe Biden reportedly asked Ukrainian authorities to fire Ukrainian Prosecutor General Viktor Shokin during the latter's corruption investigation into Burisma. Shokin was removed in March 2016. According to media reports, Biden had placed pressure on Petro Poroshenko, then the country's president, by threatening to withhold a much-needed $1 billion US loan, if the latter refused. Ukrainian prosecutors were investigating Burisma's possible involvement in financial crimes including money laundering, with former Polish President Aleksander Kwasniewski and former CIA Counterterrorist Center director Joseph Black also involved. Hunter Biden stepped down from the board of directors of Burisma in April 2019.

During the Obama administration, Biden was reported to have curated US policy on Ukraine, particularly in the aftermath of the political and military crisis which rocked the country after the 2014 coup. This included lobbying President Obama to authorise the delivery of lethal weapons to Ukraine, and pressing Kiev to implement economic reforms.