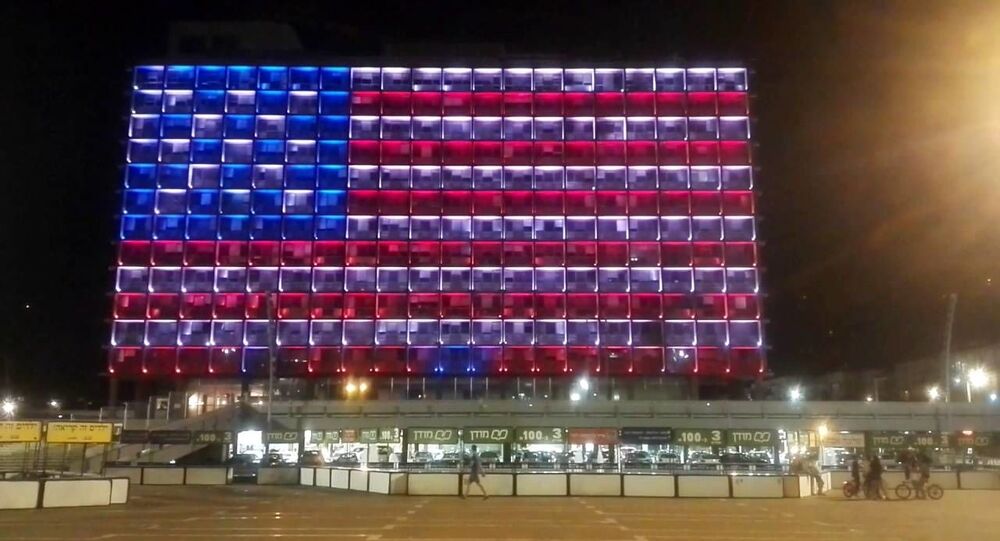 TEL AVIV (Sputnik) - The facade of the Tel Aviv-Yafo municipality building lit up last night with the colors of the US flag in solidarity with the United States, which was struck by mass deadly shootings over the weekend.

"Tel Aviv City Hall lit up with the colors of the US flag after the terrible shootings incidents in Dayton and El Paso. Our thoughts and prayers are with the people of the United States, with all those who suffered in these attacks," the municipality said.

Tonight, the #TelAviv City Hall building is lit up with the colors of the US flag, after the terrible shootings in Dayton, #Ohio and El Paso, #Texas. Our thoughts and prayers go out to the people of the United States and all those affected by these terrible attacks.@IsraelinUSA pic.twitter.com/PXRKjdOTZs

​The iconic Tel Aviv building was similarly illuminated with the flags of Egypt, France, Spain, the United Kingdom and Russia to commemorate the victims of deadly attacks in these countries in recent years.

The United States was shaken on Saturday by two separate fatal shootings. At least 20 people were killed and 26 more injured after a gunman opened fire in a Walmart Cielo Vista Mall in El Paso, Texas on Saturday. Hours later, another gunman attacked people in the city of Dayton, Ohio, killing nine and injuring at least 26 people. The shooter's sister was among those killed in the massacre. In the early hours on Sunday, at least seven people were injured in Douglas Park in Chicago when an unknown gunman opened fire from a car.