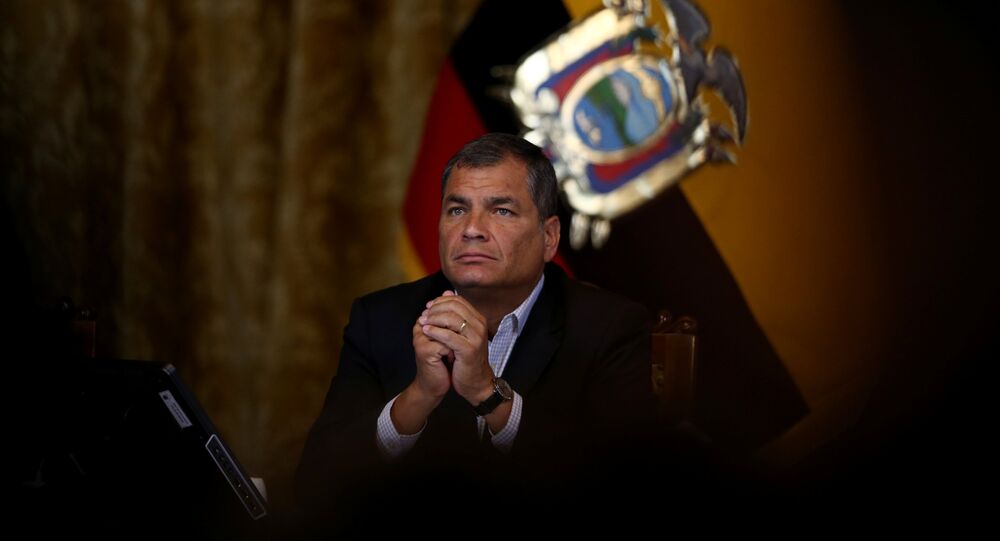 Former Ecuadorian President Rafael Correa claimed Tuesday that WikiLeaks founder Julian Assange meddled in 2016 US presidential elections during his stay at the Ecuadorian Embassy in London, according to CNN.

"We did notice that he was interfering in the elections and we do not allow that because we have principles, very clear values, as we would not like anyone to interfere in our elections", he said, according to report. "We are not going to allow that to happen with a foreign country and friend like the US".

In 2012, Assange was granted asylum in the Ecuadorian Embassy, allowing him to evade prosecution over rape allegations in Sweden, which he denies. According to media reports, Assange made an agreement with Ecuadorian authorities not to interfere with other states.

In 2017, Correa was succeeded by Lenin Moreno, a staunch supporter of the United States. In 2018, Ecuador cut Assange’s internet access over allegations of breaching the non-interference agreement. In 2019, Moreno voided Assange’s immunity, allowing the UK police to drag the WikiLeaks founder out of the building.

‘Not Saying All The Truth Is Called Manipulation’

He rejected the idea that Ecuador cooperated with WikiLeaks in a bid to put Trump into the Oval Office.

"I am way closer to Hillary Clinton than Trump", Correa said. "I know Hillary, I admire her. I was a student in the US, doing my doctorate when Bill Clinton was (president). Trump is an enemy of our migrants. Why the hell are we going to support him? None of this makes sense".

"I think that President Correa is mistaken there because you can only publish the information you obtain. WikiLeaks can only publish the information that people provide to WikiLeaks and that is filtered through the anonymous system," Renata Avila, the Senior Digital Rights Advisor for the World Wide Web Foundation, said commenting on the news. "Unfortunately, the information provided was only documenting the corruption and basically the decay of the Democratic Party and not of the Republican Party; and that in no way means that you are favouring one side."

In his turn, Don Debar, a political analyst and host of the syndicated daily radio newscast CPR News in the US, said that he is shocked at Correa's expression of admiration for the Clintons, if the interview is real.

"It's not clear to me who interviewed the former President Rafael Correa, nor when the interview took place", he said, adding "I must say, if Correa really said those things, then I begin to see his selection of Lenin Moreno in a different light and, perhaps, his intentional installation of another puppet of American imperialism with a less amusing public persona".

WikiLeaks founder Assange is now serving a 50-week sentence in a UK prison for skipping bail. He is fighting requests for extradition to the United States, where he is wanted over the 2010 publication of diplomatic cables and war logs obtained by former US serviceman Chelsea Manning. Interestingly, no charges were brought by Washington against Assange in relation to the 2016 leaks.

Sputnik and RT editor-in-chief Margarita Simonyan blasted the report, accusing CNN of “rummaging through the dumps in search of a Russian trail".

'Arm of the Thought Police': Roger Waters Roasts Twitter for Shutting Down a Pro-Assange Channel