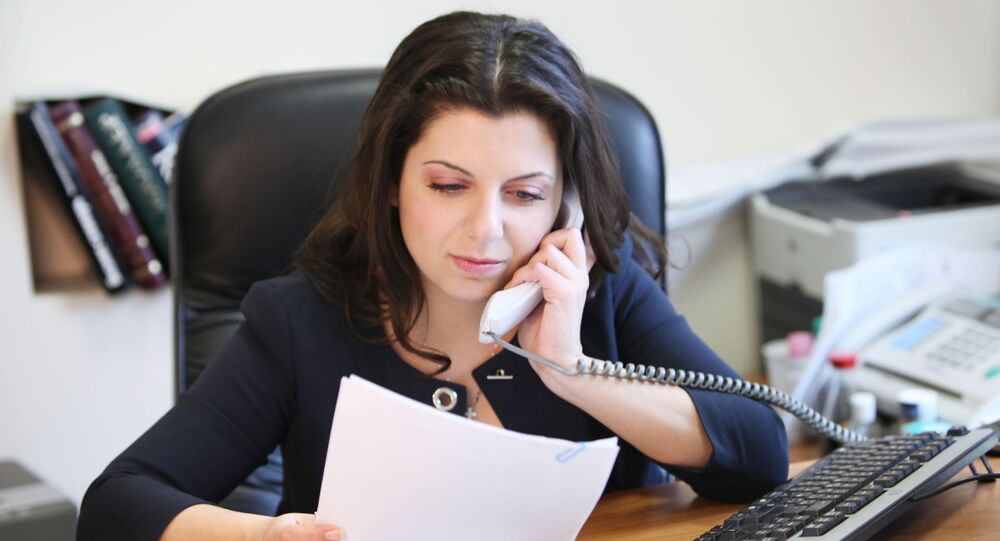 Sputnik and RT editor-in-chief Margarita Simonyan has commented on a CNN report about WikiLeaks founder Julian Assange’s alleged collaboration with Russian hackers to interfere in the 2016 US presidential elections.

Margarita Simonyan, editor-in-chief of Sputnik and RT, has taken to her Telegram channel to respond to CNN publishing “an information bomb” about her alleged “secret cooperation” with WikiLeaks founder Julian Assange.

“The 'We-rummage-through-the dumps-in-search-of-a-Russian trail' TV channel and my favourites from the CIA have cast-iron information that my deputy went to the [Ecuadorian] Embassy and brought something to Assange. Dear CIA, I'll tell you more - not only my deputy went to the embassy but I also did so and then posted photos on Twitter. Should I send a link to you ?” Simonyan wrote.

She went on by mentioning “cassettes, floppy disks, flash drives, pieces of paper, technical equipment, candy, and other things” that she and her deputy ostensibly brought to Assange.

In this vein, Simonyan recalled that Assange had worked as a host on RT and that “it is difficult to conduct the programme without technical equipment”.

“And we carried away from Assange a lot of things, this one for example. Now I have it on my bedside table. Do you need my fingerprints? I have them”, she further noted.

Simonyan also called on CNN and the CIA “to find out for themselves” why Assange praises her, citing American taxpayers and “our employees”’ money used for CIA and CNN employees’ salaries.

Simonyan’s remarks come after CNN published a report on Monday citing a spate of “exclusive documents” as claiming that Assange allegedly cooperated with Russian hackers and other intelligence officials in order to damage Hillary Clinton’s reputation and ruin her presidential run during the 2016 US elections.

Assange spent almost seven years in the Ecuadorian Embassy in London where he had been seeking political asylum since 2012. After Ecuador revoked his asylum last year, he was arrested by British police in April 2019, in what the WikiLeaks founder has slammed as an “unlawful” move.

The 48-year old, who became famous for leaking classified US government data, currently faces extradition to the US on 18 charges, including 17 counts of espionage and a single count of hacking into a Pentagon computer network, something that carries a cumulative prison sentence of up to 175 years in jail.

Assange Adviser Claims Pentagon Behind US Crackdown on WikiLeaks Founder