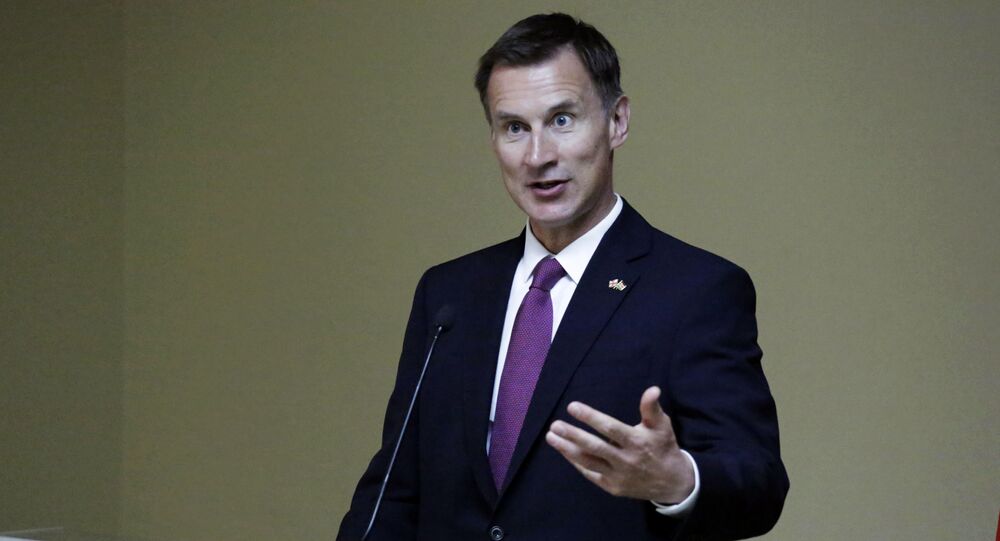 British Foreign Secretary Jeremy Hunt defended the recently resigned British ambassador to Washington, saying he was "the best of Britain” and promising London's other diplomats they would "always get all the support you need to carry out your vital work. I will ensure you get it.”

“The twin roles you perform of speaking truth to power and standing up for British interests have never been more vital,” Hunt wrote in a Thursday message to all Foreign & Commonwealth Office staff. “Please keep speaking up without fear or favour, remembering that the UK government alone will determine appointments based on our national interest alone.”

“I want you to know that you will always get all the support you need to carry out your vital work. I will ensure you get it," he added.

The message comes a day after London's envoy to the United States, Kim Darroch, resigned from his post following the leak of an embassy cable in which he called US President Donald Trump "inept and incompetent." The messages were published by the UK Daily Mail on July 6.

Trump, in turn, blasted the ambassador as a "stupid guy" and a "pompous fool," and said the White House would cut off contact with Darroch.

“The current situation is making it impossible for me to carry out my role as I would like,” Darroch said in his resignation letter Wednesday.

The Guardian noted that Hunt's Thursday comments were an implicit rebuke of Boris Johnson, his rival in the contest for leadership of the Conservative Party, who did not rise to Darroch's defense following Trump's criticisms. However, later Thursday night, Johnson did say he “rang Kim, I think yesterday, and said how much I regretted his resignation, which indeed I do."

"And I think it was absolutely disgraceful that those diptels [diplomatic telegrams] were leaked and I think it is vital – and as I said to Kim and I say to everybody – that all our civil servants, all great ambassadors such as Sir Kim, should feel free to speak without fear or favour to their political masters and then it is up to their political masters to decide what to do with it," Johnson continued, speaking at a party leadership hustings. "And I think whoever leaked that, those diptels, deserves to be hunted down and prosecuted.”