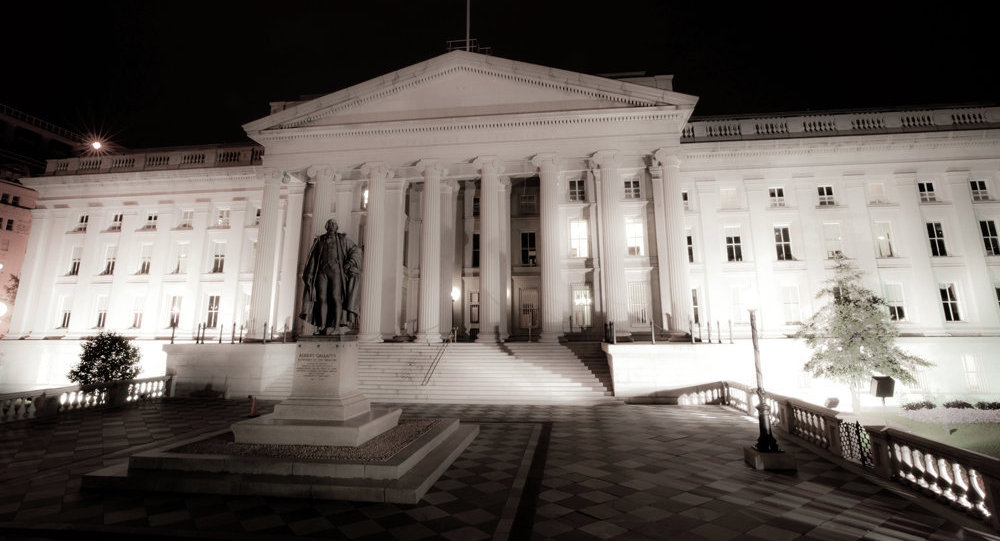 The day before, US Secretary of State Mike Pompeo blamed Russia and Venezuela for a crippling refugee crisis that has been seen in the Latin American country.

US National Security Adviser John Bolton announced on Wednesday that the US was imposing a new round of sanctions against Venezuela, adding the country's Central bank to the sanction list.

According to the senior official, the newly-applied sanctions should become a warning to "all external actors, including Russia."

"Today, the Department of the Treasury's Office of Foreign Assets Control (OFAC) is designating Banco Central de Venezuela, or the Central Bank of Venezuela, pursuant to Executive Order (E.O.) 13850, as amended by E.O. 13857, for operating in the financial sector of the Venezuelan economy," the Treasury said. "Additionally, OFAC designated Iliana Josefa Ruzza Terán, pursuant to E.O. 13692, as amended, who is determined to be a current or former official of the Government of Venezuela."

© AP Photo / Fernando Vergara
US, Colombia Use Venezuela to Divert Attention From Drug Trafficking - Caracas
Since the beginning of a political crisis in Venezuela earlier this year, the US has imposed several rounds of sanctions, targeting the country's oil and banking sectors as well as individuals belonging to the country's lawfully elected leadership.

While imposing the sanctions, the US has also blamed several countries, including Russia, for the political crisis in the Latin American country. US Secretary of State Mike Pompeo, in his turn, said that Russia "intervened" and "went against the leadership of the country of Venezuela."

Russia has refuted the US claims numerous times, saying that its military personnel that arrived in Venezuela last March was involved in talks on defence cooperation with officials. Moscow has pointed out that Russia's presence was fully legitimate and in accordance with the defence agreement between Moscow and Caracas.

Russian Foreign Minister Sergei Lavrov, in his turn, has stated that the Russian servicemen were helping to carry out maintenance on previously supplied Russian military equipment.

On Sanctions Against Nicaragua

According to the Department's press release, it has imposed sanctions on Nicaraguan President Daniel Ortega's son and the Nicaraguan bank Banco Corporativo.

The move comes after Mike Pompeo said last month that the United States could impose sanctions against the Nicaraguan government if it poses a similar threat as Venezuela.

Nicaragua has been in a political crisis since April 2018 when people took to the streets to protest unpopular social security reforms announced by Ortega. Despite the president canceling the reforms a few days later, protests ensued with people redirecting their discontent at Ortega.