MOSCOW (Sputnik) - Ecuadorian President Moreno stated previously that the WikiLeaks founder has been trying to use the embassy as a "centerfor spying." In addition, he accused Assange of insulting Ecuador.

"WikiLeaks refutes President Moreno’s grotesque lies about Assange. They are a crude attempt to distract from Moreno’s own corruption scandals in Ecuador and the cowardly expulsion of our publisher into the reach of US authorities," WikiLeaks wrote on Twitter.

The remark comes after Moreno said, soon after Ecuador's withdrawal of asylum from Assange at its London embassy, that the WikiLeaks founder had been trying to use the embassy as a "center for spying." He has also accused Assange of insulting Ecuador, its government and people. Moreno has also claimed that 80 percent of Ecuadorians support the decision to terminate Assange's asylum. 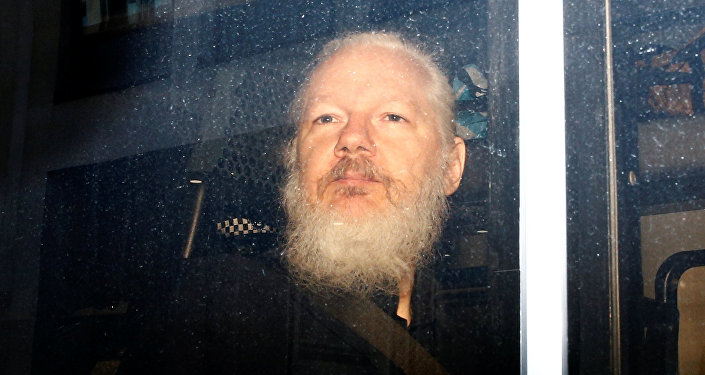 © REUTERS / Henry Nicholls
President Moreno Reveals REAL Reason His Gov't Revoked Assange's Asylum
On 11 April, Assange was arrested at the Ecuadorian Embassy in London after Quito withdrew political asylum granted to him. The WikiLeaks founder, who has become famous for leaking classified US government data, now faces the threat of extradition to the United States on charges of conspiracy to commit computer intrusion and could get up to five years in jail.

Assange took refuge in the Ecuadorian embassy in 2012 in a bid to flee prosecution by the Swedish authorities on sex offence charges that he denied as politically motivated and that were dropped back in 2017.