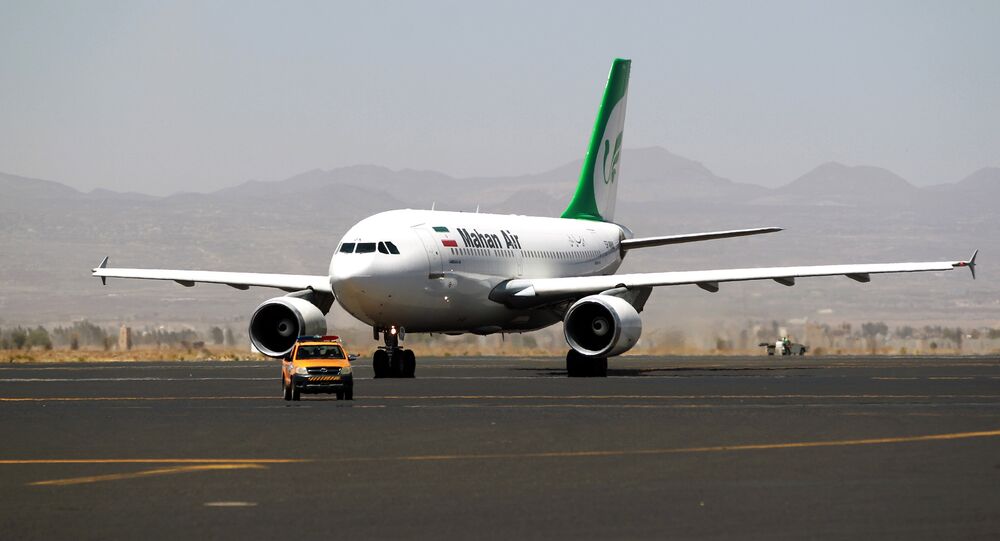 The Trump administration withdrew from the Iran nuclear agreement last May and tightened sanctions against the Venezuelan government starting in January, prompting both Tehran and Caracas to look for ways to get around the tough US restrictions.

Mahan Air, Iran's second-largest airline, has begun offering direct flights to Venezuela, with the first flight taking off from Tehran on Monday with a foreign ministry delegation on board, the Islamic Republic News Agency (IRNA) has reported.

The private airline reportedly has nothing to fear in terms of retaliatory US sanctions, since it was already blacklisted by Washington in 2011 amid US claims that it provided logistical support to the Islamic Revolutionary Guard Corps, an Iranian military unit which the US has recently mulled designating as a foreign 'terrorist organisation'.

© CC BY-SA 2.0 / Pete Markham / Huntington Beach Trip - Aug 2014 - Sunset over the oil rig.
Sanctions Against Iran and Venezuela Made US Leader in Oil Production – Energy Security Expert
Caracas is the first destination in the Western Hemisphere for Mahan Air, whose planes currently service about 50 domestic and international routes across Iran, Asia and Europe. The carrier was recently forced to stop its flights to destinations in France and Germany over alleged logistics flights to Syria in support of the Syrian military and its anti-terrorist operations.

Iranian Civil Aviation Organisation spokesman Reza Jafarzadeh confirmed that the new route was established on early Monday morning, with the first non-stop Tehran-Caracas flight expected to take about 16 hours. It's not clear at this point how many times a week the back and forth flights will occur.

The first flight is said to be carrying Mohsen Baharvand, the director of the Iranian Foreign Ministry's department for the Americas, who is expected to touch down in Caracas later Monday to discuss the current state of affairs in the Latin American nation with his Venezuelan counterparts.

Mahan Air was established in 1992, becoming Iran's first private airline. The airline has over three dozen modern aircraft, including planes made by Airbus, British Aerospace, and a lone Boeing 747-300, and is one of the country's largest airlines.

© AP Photo / Richard Drew
US Aim in Venezuela is Regime Change, Including Military Option - Russian Envoy to UN
The Trump administration unilaterally withdrew from the 2015 Iran nuclear deal in May 2018, slapping the Middle Eastern country with several rounds of increasingly tough sanctions and threatening to bring the country's oil revenue down "to zero." In January, the US imposed crippling sanctions on Venezuela's oil industry and confiscated government assets abroad as part of a bid to see opposition leader and self-proclaimed 'interim president' Juan Guaido take power.

Tehran was one of about 50 countries which denounced US meddling in Venezuela at the UN in February, and has voiced its support for the country's democratically elected government.