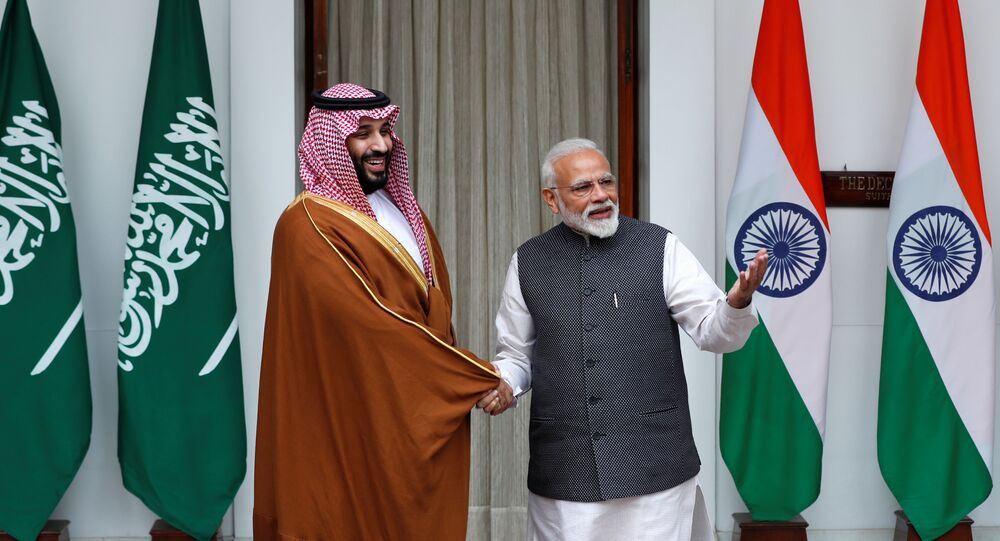 NEW DELHI (Sputnik) - Saudi Arabia's Crown Prince Mohammed bin Salman will hold talks on Wednesday with Indian Prime Minister Narenda Modi and the sides will discuss issues of the international and bilateral agenda, as well as problems of regional security, a spokesperson for the Indian Foreign Ministry told Sputnik.

"At the upcoming talks on Wednesday, Prince bin Salman and Prime Minister Modi will discuss a range of bilateral and global issues, as well as regional security issues. Following the meeting, they are expected to make a joint statement on the problem of terrorism, against which both countries are actively fighting," the spokesperson said.

The Saudi crown prince, who is also the Saudi defense minister, arrived in India for a one-day visit on Tuesday evening. Modi personally met bin Salman at the airport in violation of the protocol and all Indian media published pictures of their friendly hugs on Wednesday morning. Prior to India, the crown prince visited Pakistan, and after India he will travel to China, where he will make the last stop as part of his Asian tour.

© CC0
Saudi Arabia Deports Alleged Terror Operative to India - Reports
Last week, the relations between India and Pakistan significantly aggravated following a deadly terrorist attack against Indian army in Jammu and Kashmir. After the attack, India accused Pakistan of having a "direct hand" in the incident and blamed the neighboring nation for harboring and protecting terrorists. As a punitive measure, India withdrew Pakistan's "Most-Favored Nation" status and raised custom duties on goods imported from Pakistan to 200 percent.

Saudi Arabia, which is a key ally of the United States in the Middle East, has traditionally supported Islamabad in political issues. Following the visit of bin Salman to Pakistan, a number of agreements were signed providing for investments in the Pakistani economy totaling $20 billion. The crown prince has also offered to act as an intermediary between the conflicting sides, while the Foreign Ministry of Saudi Arabia announced its intention to help India and Pakistan resolve their differences peacefully.