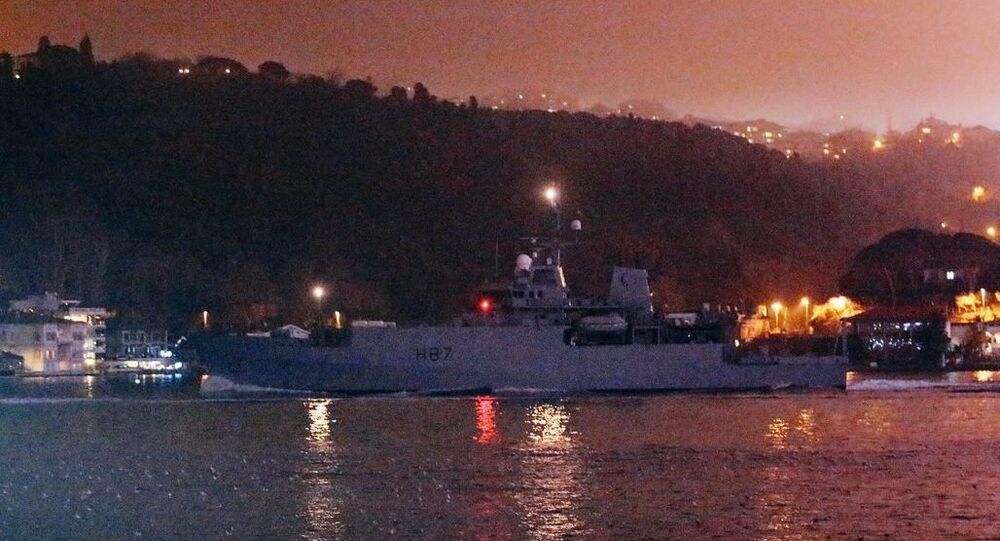 The arrival comes after reports the US may send its warship to the Black Sea amid the Kerch Strait tensions. On November 25, Russia detained three Ukrainian Navy ships which breached the Russian maritime border, trying to sail through the Kerch Strait, the entrance into the Sea of Azov.

The UK Royal Navy's survey vessel HMS Echo has entered the Black Sea "for the first time since the Sea of Azov crisis", according to a tweet by the Turkish tracking website Bosphorus Observer.

The media outlet reported the ship was scheduled to remain in the Black Sea for 21 days in line with the Montreux Convention Regarding the Regime of the Straits. The document gives Turkey control over the Bosporus Straits and the Dardanelles and regulates the transit of naval warships.

HMS Echo's arrival in the Black Sea comes after media reports earlier this month that the US military had allegedly asked the Department of State to notify the Turkish government about its intent to sail a warship into the Black Sea.

The move comes in response to a naval incident in the Kerch Strait on November 25, when Russian detained three Ukrainian Navy ships — gunboats Berdyansk and Nikopol, as well as tugboat Yanu Kapu — after they breached the Russian maritime border, attempting to sail through the Kerch Strait, the entrance into the Sea of Azov.

© REUTERS / Murad Sezer
MSM Trying to Call Routine US Black Sea Activity ‘Strategic Manoeuvre’ - Admiral
Shortly after the incident, Ukrainian President Petro Poroshenko decreed martial law for three months in several regions of the country bordering Russia, as well as the coast of the Black Sea and the Sea of Azov.

The United States urged Russia to release the sailors and return the seized vessels to Ukraine. President Donald Trump decided to call off a meeting with Russian President Vladimir Putin during the G20 summit in Argentina after receiving a report on the Kerch Incident.

Russian President Vladimir Putin, for his part, described the incident as a "provocation" used as a pretext to introduce martial law in Ukraine. President Putin suggested it could be connected with Poroshenko's low approval ratings with the March 2019 presidential election looming in Ukraine.