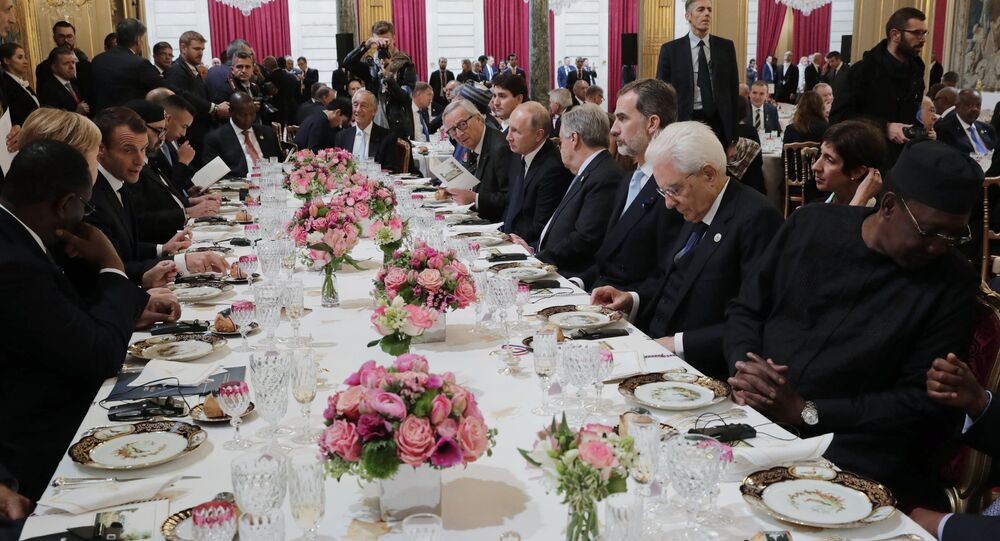 PARIS (Sputnik) - Russian President Vladimir Putin said that he had had a good conversation with his US counterpart Donald Trump in Paris, where the two leaders traveled to take part in the celebrations dedicated to the 100th anniversary marking the end of World War I.

"Yes," the Russian leader told journalists when asked if he had an opportunity to have a conversation with Trump.

© AP Photo / Ludovic Marin
'When to Expect New Sanctions?' Twitter Jeers at Putin's Warm Handshake With Trump on Armistice Day (VIDEO)
Earlier in the day, a source in the Russian delegation told Sputnik that the Elysee Palace has changed the seating plan for the reception at the palace on the occasion of the 100th anniversary marking the end of World War I, with Russian President Vladimir Putin and his US counterpart Donald Trump seating opposite each other, unable to engage in conversation.

According to the initial plan, Putin and Trump should have been sitting on the same side of the table, separated only by French President Emmanuel Macron.

"The Elysee Palace has indeed changed the seating plan for the leaders at the table before the start of the working lunch. According to the final plan, the Russian and US presidents, Vladimir Putin and Donald Trump, were sitting opposite each other and did not have the opportunity to have a detailed conversation," the source said.

Kremlin Spokesman Dmitry Peskov confirmed that the two leaders did not have an opportunity to have a conversation and only greeted each other at the palace.