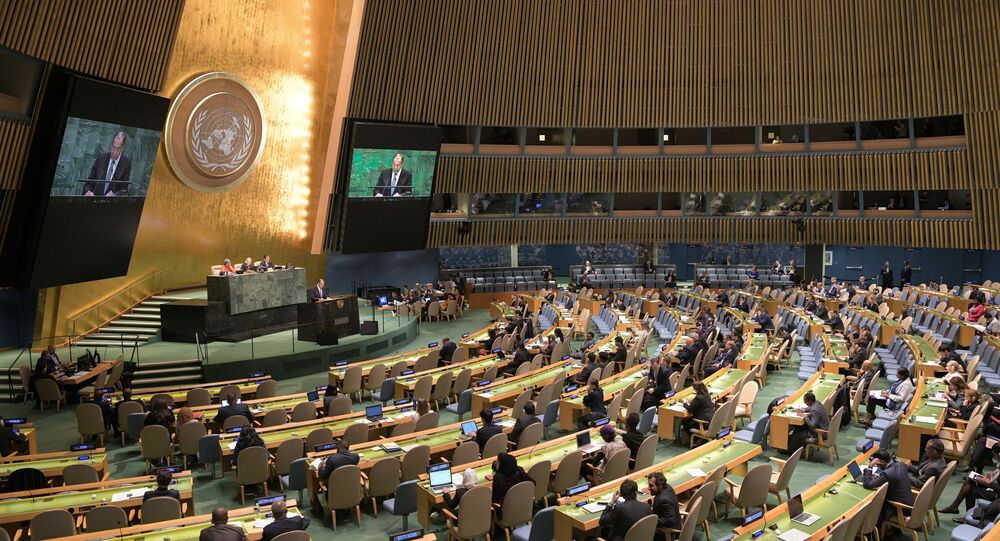 Russia introduced a draft resolution aimed to preserve the Intermediate-Range Nuclear Forces Treaty to the UN General Assembly First Committee after the US announced a unilateral withdrawal from the pact.

The First Committee of the UN General Assembly, also known as Disarmament and International Security Committee, declined on Friday to hear Russia's draft resolution in support of the Intermediate-Range Nuclear Forces (INF) Treaty.

Russia proposed the draft resolution to the committee, but the US delegation protested against it. On Friday, the committee voted on whether the resolution draft should be reviewed.

Andrei Belousov, deputy director of the Russian Foreign Ministry's Department of Nonproliferation and Arms Control, commented on the vote, saying the reaction of the committee was puzzling.

"Most of the nations that abstained from the vote are active supporters of nuclear disarmament," Belousov commented. "Most of those who voted against [the resolution] were supporters of INF preservation."

"In a span of a year, if the United States withdraws from the treaty and begins to build up its nuclear potential uncontrollably, we will have to face another reality, and the procedural issues we have been locking horns over for two days will look so small and insignificant, and we will regret today's decision," Belousov warned.

© AP Photo / Virginia Mayo
NATO Envoys Reportedly Urge Trump to Keep INF Treaty in 'Last-Ditch Effort'
Several of the countries that abstained argued the issue would be more addressed more appropriately by the UN Security Council, according to AFP.

On Monday, Russian Foreign Minister Sergey Lavrov said Moscow would wait for Washington's official clarification on its possible withdrawal from the INF Treaty and only then determine Russia's position on the matter. He added that any action in this area would be met with counteraction, stressing that parity would be maintained under any circumstances.