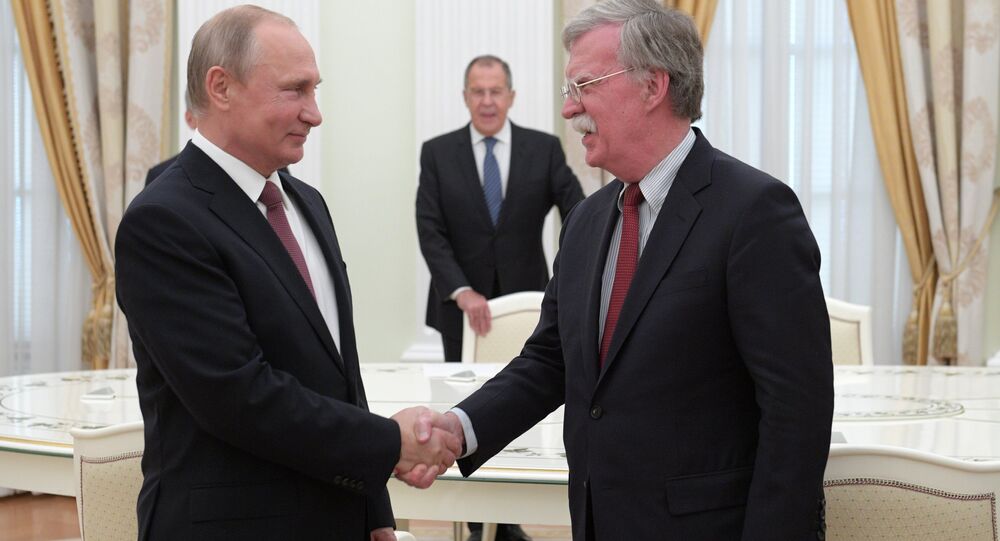 The Russian president met Donald Trump's national security advisor on Tuesday, telling him he was "surprised" by Washington's "unprovoked" and unfriendly steps toward Moscow, while stressing the importance of continued dialogue.

"As far as I can recall, the US coat of arms depicts an eagle, holding 13 arrows in one talon, and an olive branch, a symbol of peace-loving policy, with 13 olives, in the other. Question: Did your eagle eat all the olives, leaving only arrows?" Putin asked.

The Russian president's remarks prompted laughter in the room from both delegations.

Putin also commented on the US coat of arms' motto, 'E pluribus unum' (Latin for 'Out of many, one'), saying it signifies that it's possible and necessary to look for common ground, despite differences. John Bolton voiced his agreement with this sentiment.

© Sputnik / Евгения Новоженина
US coat of arms at the US Embassy in Moscow.

Putin told his American guest that he would like to speak with him not only as an assistant to President Trump, but as an expert in the field of disarmament and arms control.

For his part, Bolton expressed hope that he could answer Putin's questions, but quipped that he "didn't bring the olive branch" with him. "I thought so," Putin shot back, prompting more laughter in the room.

© Sputnik / Aleksei Nikolsky
Bolton on Meeting With Putin: Wasn't Breakthrough, Let's See What Trump-Putin Summit in Paris Will Bring
Putin is set to hold talks with Trump on November 11 during his upcoming trip to Paris, Kremlin aid Yuri Ushakov said Tuesday, citing the outcome of the president's meeting with Bolton.

President Trump announced Washington's intention to withdraw from the INF Treaty on Saturday, accusing Russia of violating the terms of the agreement, which prohibits Russia and the US from developing or deploying ground-based ballistic and cruise missiles with ranges between 500 and 5,500 km, respectively. On Monday, Moscow warned that a US withdrawal from the treaty would prompt Russia to do what's necessary to preserve strategic stability. China, Austria, Germany, Italy, Spain, and other countries voiced concerns over Washington's plans. The UK voiced its approval, accusing Russia of non-compliance with the treaty.