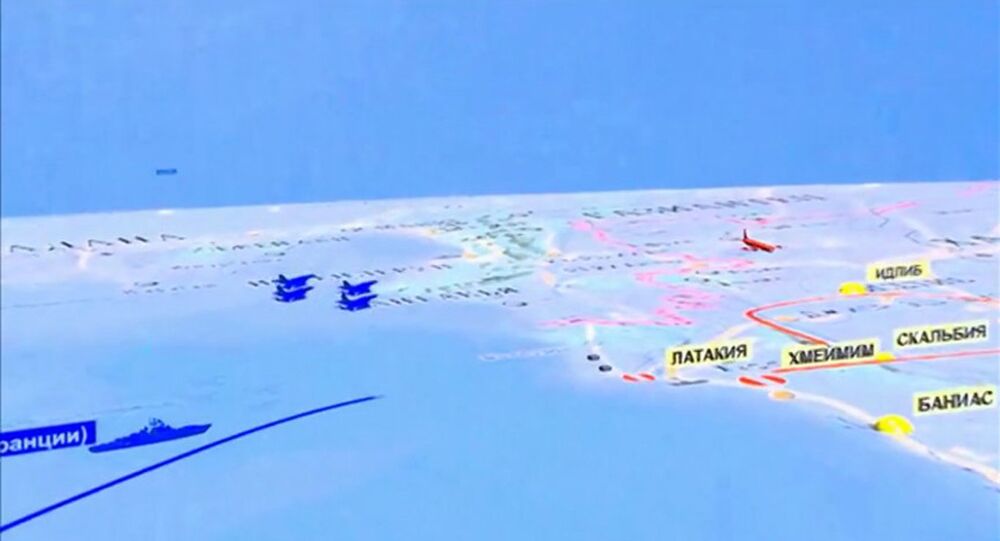 "Today, we share detailed information about the downing of the Ilyushin IL-20 airplane of the Russian Aerospace Forces near the Syrian coast on September 17. We will present a minute-by-minute account of this tragic incident that was made based on the objective radar readings including those from the Plotto air information display system," he said.

According to Konashenkov, the Israeli Air Force provided Russia with misleading information on the location of its airstrikes on targets in Syria, which prevented the commander of the Il-20 plane from relocating to a safe zone and led to its destruction.

"During the negotiations via the deconfliction channel, the representative of the Israeli Air Force Command reported that the targets assigned to the Israeli aircraft are located in Northern Syria … As you can see on the map, the Israeli jets delivered strikes in Latakia which is a western province of the country — and not in the north of the Syrian Arab Republic. The city of Latakia is located on the western coast. The misleading information provided by the Israeli officer about the area of strikes did not allow the Russian Il-20 airplane to move timely to a safe area," Konashenkov said.

Konashenkov told a briefing that the Israeli Air Force had notified Russia of its planned attacks on Syrian targets simultaneously with the beginning of the strikes instead of doing it in advance, thereby violating 2015 bilateral agreements to prevent such incidents in Syrian airspace.

"Israel did not inform the Russian force about its operation in advance — but rather they issued a warning simultaneously with the beginning of the strikes, which constitutes a breach of the agreements. These actions constitute a clear violation of the 2015 Russian-Israeli agreements, which are aimed at preventing clashes between our armed forces, in and over Syria, that were reached by the joint working group," Konashenkov said.

He further added that the IAF has on multiple occasions created potentially dangerous situations for the Russian forces located in Syria, emphasizing that Moscow had warned Tel Aviv about its air force operations in the war-ravaged country 12 times more often.

Konashenkov emphasized that the ministry possessed an audio recording proving that the IAF had warned the Russian side in the Russian language about the envisaged airstrike on targets in Syria when Russia's IL-20 was downed.

"The talk was conducted in Russian. The Russian Defense Ministry has a record of the conversation," he stressed.

YouTube/Sputnik
After Il-20: Why Israel Will Have to Demonstrate That It Values Russian Lives
According to the fresh released information, the Il-20 crew began emergency descending after it was hit by a missile, with pilots of Israeli F-16 fighter jets using the Russian aircraft as a "shield" against Syrian air defenses.

Konashenkov elaborated that an Israeli plane maneuvered toward the approaching Il-20 — which was considered another attack by Syrian air defense systems.

He further debunked claims by the IDF that their jets had already been within Israeli airspace when the Syrian Army launched the missiles that hit the Russian plane, saying that F-16s left the area only 10 minutes after receiving the information on the downing.

"The presented objective data testifies that the actions of the Israeli fighter pilots, which led to the loss of life of 15 Russian servicemen, either lacked professionalism or were an act of criminal negligence to say the least. Therefore, we believe that the blame for the tragedy with the Russian Ilyushin Il-20 aircraft lies entirely with the Israeli air forces and those who made the decision to carry out such actions," Konashenkov stressed.

The ministry spokesman went on to say that Israeli jets may have posed a threat to passenger planes when the Il-20 was shot down, and stressed that Russia has never violated the agreement on flights in Syria with Israel.

"Thus, the Israeli jets created a direct threat to any passenger or transport aircraft that could have been there at that time and could have become victims of the adventurism of the Israeli military," Konashenkov added.

A sizable number of pro-Iranian forces and 24 multiple launch rocket systems were withdrawn from the Golan Heights with Russian military's assistance, Konashenkov said, adding that this allowed Tel-Aviv to completely exclude the shelling of Israeli territory from within the disputed area.

"Currently, six observation posts of the military police of the Armed Forces of the Russian Federation are being deployed along the Bravo line, ensuring security for the staff of the UN mission," he said.

His comments came days after Russian troops and personnel from the Russian Reconciliation Center for Syria had been deployed to de-escalation zones across Syria to help maintain security and the ceasefire in the Golan Heights between Damascus and Tel Aviv.

The Il-20 vanished from radar screens over the Mediterranean Sea on September 17 after being hit by a Syrian S-200 surface-to-air missile near Hmeymim Airbase, which coincided with airstrikes conducted by Israeli F-16s on Syrian targets in the province of Latakia. Shortly after the incident, the Russian Defense Ministry accused the Israeli Air Force of using the Russian plane as a shield against Syrian air defenses.

While expressing its condolences in connection with the death of the 15 servicemen on board, Israel insisted that Syria was responsible for the tragic incident.

​Meanwhile, addressing the incident earlier this week, Russian President Vladimir Putin said that Israel hadn't downed the Russian plane, but that a “chain of tragic accidental circumstances” had led to the destruction.

"Russia's retaliatory measures with regard to the Il-20 downing will be directed primarily at stepping up the security of Russian military officers in Syria and our military facilities in the Syrian Arab Republic. These will be the steps everyone will notice," he stressed.