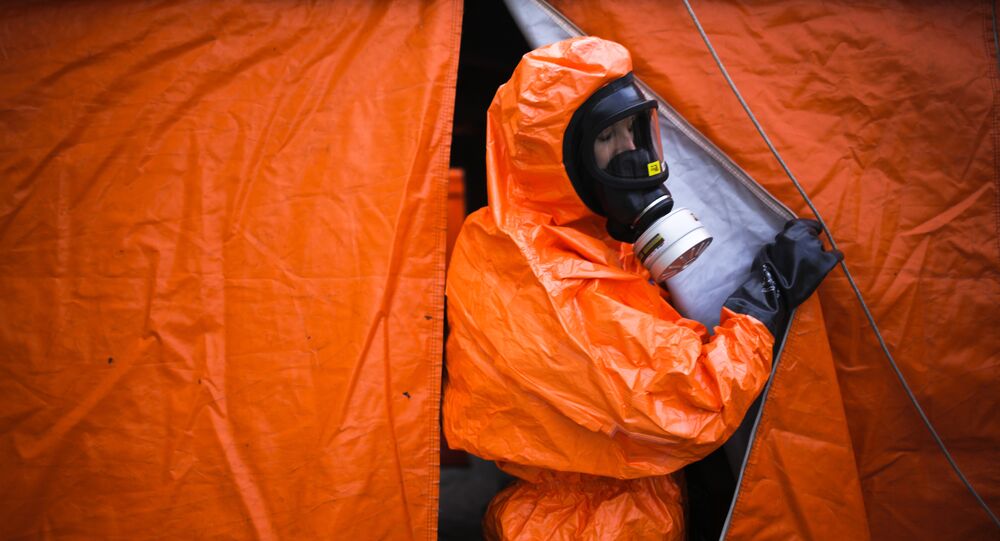 Speaking at a press conference in Moscow earlier this week, ex-Georgian State Security Minister Igor Giorgadze said he had received reports about deaths that could have resulted from vaccine tests at a US-funded lab in Georgia.

Igor Giorgadze, a former Georgian state security minister, has claimed that the US-funded medical facility, known as the Richard G. Lugar Center for Public Health Research, in Georgia could be a cover for a bioweapons laboratory.

The ex-minister has created a website to publish vast amounts of leaked documents which, according to him, might shed light on some disturbing experiments at the lab.

Having allegedly obtained some 100,000 pages of secret docs, Giorgadze said he would consistently make them publicly available. For instance, he has already revealed a United States Patent for the development of a remotely controlled “device for the aerial release of mosquitoes.”

“With the toxic mosquito release system, large masses of people can be immunized or enemy troops can now be wiped put or rendered useless without having to risk or endanger our own troops. […] For military purpose, the mosquitoes may be used to deliver an agent such as malaria to create sickness, or they could use much more toxic or highly contagious agents and viruses,” the description of the document reads.

Another no less disturbing patent published by Giorgadze describes a “capsule” that looks like a “cartridge for a firearm” and is designed to disperse a toxic agent “when struck by the firing pin of the firearm.”

“The sabotage cartridge with toxic agent technology now turns the enemy’s cartridge ammunition into a weapon of their own death and possibly the death of all his nearby combatants,” the doc says, adding that it could also be made with an internal radio-frequency device to enable the remote activation of the release of the toxic substance.

© REUTERS / Thilo Schmuelgen
Man Arrested in Germany Was Planning Biological Terror Attack
Another leaked document contains data on “hollow point payload capsules” that could be filled with a “product that may tag a person for tracing, induce sleep, cause disease, or have other effects.”

The ex-minister also published a plethora of papers, showing results in the treatment of some 30 people diagnosed with Hepatitis with certain medicines developed in the United States.

He previously claimed that dozens of people had died, with the cause of their deaths being “unknown,” and with no formal probe carried out. The papers show that the treatment included the use of the US-made drugs Harvoni and Sovaldi, which proved deadly for some patients.

Calls for Expert Assessment and US Investigation

Giorgadze has stressed that it remains unclear what role the Lugar Center played in the development of such technology and has called for an expert assessment of the data, as he isn't specialized in the field of biological warfare. The ex-minister also didn’t rule out that the leaked documents could be a sophisticated fake.

READ MORE: US Lab in Georgia May Have Engaged in Lethal Experiments on People – Ex-Minister

During his press conference in Moscow on Tuesday, Giorgadze addressed US President Donald Trump to ask him to launch an investigation into the alleged experiments conducted in Georgia at the Lugar lab.

“On behalf of the 'Georgia Abroad' Movement, which I head, on behalf of hundreds of thousands of my compatriots in Georgia and abroad, I want to address US President Donald Trump. I appeal to you with an earnest request to initiate an investigation into the legality of the experiments conducted in Georgia by the staff of the Lugar laboratory, who acted based on permission given by your predecessor’s administration, and in agreement with Georgia’s former president,” he said.

Meanwhile, Russia’s Defense Ministry has been analyzing the documents related to the alleged biological program and has stated that the materials contain some signs showing serious violations of the international convention on biological weapons.

“Currently, all documents published on the website of former Georgian Minister Igor Giorgadze are being examined by specialists from the Russian Ministry of Defense. The results of the analysis will be revealed to Russia and the global community,” the ministry’s statement reads.

The allegations made by Giorgadze have already been rejected by a Pentagon official:

“The accusations you outlined are totally absurd and likely an invention of the fanciful Russian disinformation campaign against the West. The United States is not developing biological weapons in the Lugar Center. These are also not US facilities,” Defense Department spokesperson Eric Pahon told Sputnik on Friday.

© AP Photo / Damian Dovarganes
Pentagon Denies Developing Biological Weapons at Lugar Center in Georgia
Pahon further claimed that the medical facility was owned and operated by the Georgian National Center for Disease Control and Public Health and was a joint human and veterinary public facility.

Georgia has also dismissed the alleged experiments on people as “absurd,” with a government official, Zurab Abashidze, telling reporters that “no secret experiments have been conducted in this center.” He further stressed that the work of the lab was “absolutely transparent,” and that the facility itself is owned and financed by the Georgian government.

Earlier this week, Sputnik reached out to the Lugar Center for comment, with a spokesperson strongly denying Giorgadze’s claims: “Nothing like this happens here. Our lab’s head has repeatedly said that he invites anyone who wishes to do so to visit the laboratory to dispel all doubts. There are no barriers to doing so.”